In this installment of the Mayors and Schools Field Trip, Mayor Rybak sits down with former Chicago Mayor Richard M. Daley, the man who helped change the Chicago system to one of mayoral control of schools.

Living Cities is hitting the road with former Minneapolis Mayor R.T. Rybak to learn about the complex relationships between mayors and urban school systems. Read the first piece in the series, Mayors and Schools: The Key Relationship to Ensuring Quality Urban Education.

Chicago is a city of broad shoulders and big ideas, and there seems like nothing bigger or broader than the role of the mayor.

You get off the plane and see signs all over the airport that Mayor Emmanuel welcomes you. You head downtown on a freeway with welcomes from the mayor; get out of the taxi and see garbage cans brought to you by the mayor. You expect to go to the bathroom and have handtowels presented by the mayor.

The mayor really matters in Chicago.

So why is it that when you talk to people in Chicago about schools, which the mayor runs, they shift the conversation so quickly to the school board? 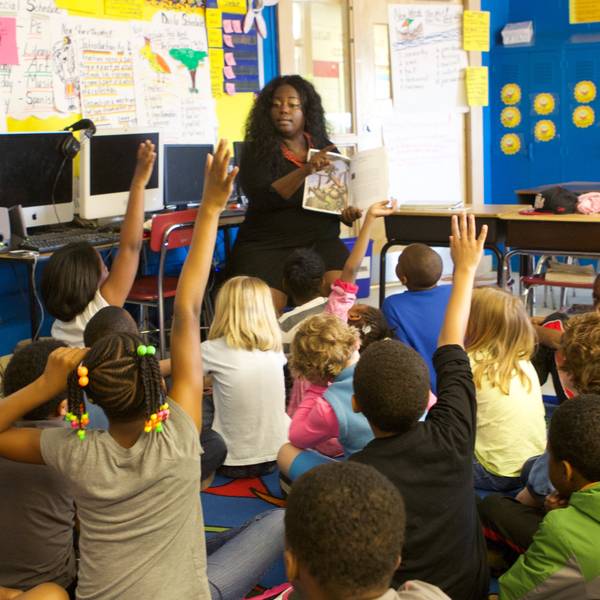 Living Cities is hitting the road with former Minneapolis Mayor R.T. Rybak to learn about the complex relationships between mayors and urban school systems.

I should clarify. They don’t say the mayor doesn’t matter in schools; far from it. Instead, many deeply involved in education here say a major reason why having a mayor directly control schools matters is that it creates a very different capacity to make tough decisions.

Here’s the argument: mayoral control, in this case overseeing administration, also allows the mayor to appoint the school board. An elected school board, by nature, is made up of people who have to win elections, which makes tough decisions tougher. Mayoral appointments they also argue, makes it possible to attract people who might never run, or might never get elected, but are more likely to make a difficult choice. Effective governance of complex multi-billion dollar organizations needs a board with specific expertise and balance of skills that you just wouldn’t get from an election, they argue.

Those points are illustrated in the latest appointments Chicago’s current Mayor Rahm Emanuel made to the board: Mark Furlong, retired CEO of BMO Harris Bank and the former CEO of Marshall & Ilsley Bank; the Rev. Michael Garanzini, retiring president of Loyola University Chicago; Dominique Jordan Turner, president and CEO of the Chicago Scholars Foundation, which provides college scholarships to underprivileged students; and Gail Ward, who worked for 35 years in the Chicago Public Schools system and was the first principal of Walter Payton College Preparatory High School. A strong case could be made that not one of them could, or would, come through a school board election.

We started our field trip to better understand mayors and schools in Chicago, the city that on many levels has seen some of the most aggressive mayoral involvement. It has also been the subject of some significant public battles over the issue, including during the last mayoral election.

When I talked to Mayor Richard M. Daley, the man who helped change the Chicago system to get mayoral control, it was not surprising that he was a big fan of the system.

“In 1989, when the federal government said Chicago had the worst public schools in the nation, I knew if I didn’t fix them our families and our businesses could never succeed,” Daley said. “My political advisors told me it was political suicide but it was one of my best decisions.”

When Daley begins talking about how that worked, the first point he makes is that a mayor-appointed school board can make tougher decisions.

“A school board falls apart in negotiations; they can’t take all the heat,” he said. “I could take the heat as long as I knew I was doing the right thing.”

Daley says, however, that this doesn’t mean mayors and unions have to be at war. “We had a good rapport with the teacher’s union. Today it’s chaos. We have more certified teachers than any other school district and you just can’t have them turn against you; you have to work with them.“

Daley’s point that mayoral control increases the capacity of board decision-making is echoed by Beth Swanson, who led Chicago schools’ Office of Management and Budget under CEO Arne Duncan, and was Deputy Mayor for Education for Mayor Emanuel.

"There were people who the mayors appointed to the school board who never would have run for public office,” said Swanson, now Vice President of Strategy and Programs at the Joyce Foundation. “You get a quality of people who give you a balance that was planned, with people who never would have put themselves through a political process where they were exposed to the rough things that happen in politics like having your name trashed.”

"There were people who the mayors appointed to the school board who would never have run for public office.”

“The school board is running a massive organization and they need to be able to act like a board of directors to focus on big issues of governance. It also allows the board to move beyond the issues of a single school.”

The flip side of this argument is that a board appointed by a single person, in this case the mayor, probably reflects a far less diverse body of opinions. There has been media coverage recently in Chicago that the board has an exceptionally high number of unanimous votes. Swanson argues that this is not a lack of diversity but, instead, a high-functioning board working through complex issues and then only bringing them to a vote when there is a consensus.

Our conversations in Chicago illustrated that, while the school board has an important role in setting the stage for tough, strategic decision-making, the day-to-day operation of the schools has rested with the school CEO, not the mayor. “It is often misperceived that the mayor is getting in there and having his hands all over everything,” Swanson said. “In story after story there was this line that the mayor was the puppet master. But in reality [in the Daley and Emanuel administrations] it was more like a CEO running the operations and being held accountable by the mayor. Sometimes the mayor would step in and take something off the table, usually when it was clear to the mayor that something was just not going to fly politically.“

Ron Huberman, Mayor Daley’s chief of staff before becoming CEO of Chicago schools, agrees. Daley, he said, left major decisions to the school CEO and handled the relationship much like a chair of a board of directors directing a company’s CEO.

I asked Huberman what the toughest decision he had as school CEO. He said quickly that it was having to close schools. What was Daley’s role in that choice? “I presented him with a list, he asked questions but supported the choice,” he said, adding that this was consistent with the way Daley gave most of his executive team latitude.

Was that the result of the mayor keeping a hands-off approach to education, more than he would for an area traditionally considered more directly a part of city government? “No,” Daley says, adding that he treated the school CEO just like he would any other department head.

“Did you treat the superintendent of the schools any differently than you treated the Public Works Director?” I asked.

“No,” Daley said. “They are part of the same thing. The child has to do well in school and they have to have good streets to get there…”

Daley may have given the schools CEOs latitude in decision-making, but it was also clear that Daley did not have a hands-off attitude about schools. Even several years after leaving office he talked in detail about the education of children in Chicago.

"The child has to do well in school and they have to have good streets to get there.”

“We gave the children more educational options,” he said. “New math and science and military academies. We had Chinese, Russian and Arabic. We painted and cleaned up the schools.”

“You have to talk about a system. Schools matter. Libraries matter; we renovated 50 libraries that helped kids. Early childhood really matters and my wife ran fundraising to provide art experiences.”

Over the years I have talked to many mayors about schools but it is very rare to hear one speak with the kind of depth and nuance that you hear from Mayor Daley. As I listened to him move our conversation seamlessly between school and out-of-school, city services and school services, it struck me that his position helped him integrate the needs the younger generation has in both classroom and community. He didn’t focus on an arm or two of government, and the services it delivered; he talked about “creating learning environments.“

And the learning environment of Chicago taught me that one of the upsides of having mayors run city and schools is they can move beyond just administering two bureaucracies to crafting an aligned city strategy for the whole child.

Next up: I head to Louisville where Mayor Greg Fisher and his team provide insight into how a high-functioning administration impacts schools without having direct control.