Government as Partner: The Need for a Full Leadership Table

Government as Partner: The Need for a Full Leadership Table

Recently, I went on my first site visit to Newark as a new member of The Integration Initiative team. During the visit, I was struck by the rapport between the City’s Housing Director, Mike Meyer, and the Project Director of the Newark Integration Initiative, Monique Baptiste. The two discussed a shared strategy, bounced ideas off of one another, and demonstrated a meaningful understanding of one another’s work. They spoke more like co-workers, not leaders in two different sectors. I was witnessing the “one table approach” in action, and realized how this alone is a huge step for the city.

Historically, the public has counted on government for leadership, direction, and solutions to our most pressing problems. However, as our problems become increasingly complex, and we find ourselves in an evolving economic and social landscape, the public has lost its faith in government and has looked to the private and nonprofit sectors to lead the search for solutions. The problem with each scenario is that one sector is anointed the leader while the others are expected to play supporting roles. As a result of this tension, each sector tends to operate on its own, while the others, particularly government, are viewed as an obstacle or external target for lobbying rather than a critical piece of the puzzle.

Through The Integration Initiation, Living Cities is learning what it means to engage the public sector in systems change work. The role of government varies in each site due to the unique histories of the areas and the availability of resources, but having a strong civic infrastructure, one table, where leaders from all sectors work together, remains a core tenet of conducting systems change work that can achieve impact at scale. This figurative and literal table is where leaders build a common understanding of the complex problems they’re trying to solve, and identify how their actions advance or detract from the outcomes they are trying to achieve. In each instance, the challenge is figuring out how to engage the public sector as cities redefine leadership in this era of complex social problems.

As we have seen from The Integration Initiative, there are a number of roles government can play: 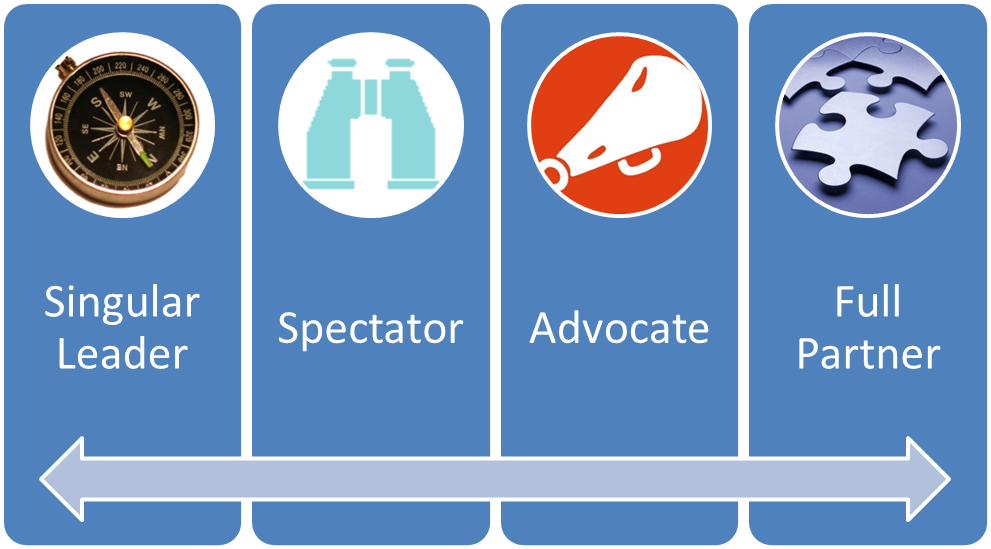 The shift to full partner is challenging for the public sector as participating deeply in a process without control creates significant, real, and imagined reputational risks. To increase the likelihood that government actors will take such a risk, the stakeholder table has to meet a few important conditions: the purpose of the table needs to be powerful; the opportunity for the public sector to advance its own agenda needs to be clear; and the risk needs to be shared. This is what I witnessed at work in Newark where the government is shifting from a long history of singular leadership towards that of a fully engaged partner with the private, nonprofit, and philanthropic sectors. When these conditions are met and we see the public sector take on the full partner or even advocate role, the results are extraordinary and these tables are proving to be worth the effort and risk.