#BensTake: Change Isn’t the Greatest Political Challenge; Sustaining It Is

#BensTake: Change Isn’t the Greatest Political Challenge; Sustaining It Is

The approaches outlined in an op-ed by Former Bogotá, Colombia Mayor are a model of the creative, out-of-the-box thinking that can empower cities to tackle our society’s most intractable problems.

I was blown away by former Bogotá, Colombia Mayor Antanas Mockus recent op-ed, “The Art of Changing a City” in the New York Times. It is reflective, honest and practical. Most importantly, it plays on many of the promising practices we are seeing in American cities, and believe we need to see more of if we are going to build a New Urban Practice that achieves dramatically better results for low income people faster.

Mockus writes about navigating a political system in crisis by creatively engaging community, creating a virtuous cycle of change, and working towards dramatically better results with an eloquent balance of data and empathy. In my mind, this is a clear and powerful articulation of the elements critical to enabling cities to deal with our society’s most intractable problems by thinking outside of the box:

Community Engagement: “What people love most is when you write on the blackboard a risky first half of a sentence and then recognize their freedom to write the other half.”

Mockus’ statement embodies an inclusive and effective way to engage citizens. In today’s hyperconnected world, we have many tools to enable government and citizens to co-create solutions. Using those tools is vital to being able to solve today’s wicked urban problems for which there is no easy, swipe of the pen of law, solution It means letting go, and letting residents write the next part of the sentence. Illustrating the declaration, “show me a city with a thousand problems, and I’ll show you 10,000 people who can solve them,” Mockus writes of having ‘printed and distributed hundreds of thousands of “citizens’ cards” which had a thumbs-up image on one side to flash at courteous drivers, and a thumbs-down on the other to express disapproval. Within a decade, traffic fatalities fell by more than half.’

We’ve seen new forms of engagement play out brilliantly in the U.S. as well. Take the participatory budgeting experiment in New York City, which began in 2011 with four Council Districts and has now grown to 24 Council Districts. When the city gave community member the opportunity to directly impact the local budget that impacted their lives, it resulted in better budgeting decisions and arguably better results. More people of color turned out to vote and Hispanics, in particular, voted at twice the usual rate.

The Virtuous Cycle: “It helps to develop short, pleasing experiences for people that generate stories of delightful surprise… then you need to consolidate those stories with good statistical results obtained through cold, rational measurement. That creates a virtuous cycle…”

Essentially, Mockus tells us that you can get large scale results by taking a series of small steps but only if you are rigorously measuring the change along the way. It is this virtuous cycle that helps us to make the necessary changes, the pivots away from what’s not working, toward a brighter future.

We’ve seen this time and time again. Last week, I wrote about the Rikers’ Island Social Impact Bond where the funders understood the program wasn’t working ‘through cold, rational measurement’ paired with stories. In our work at Living Cities, we’ve also seen sites within the StriveTogether Network employ the virtuous cycle. For example, sites have focused on disaggregating data by race to get a clearer picture of results in real-time and as the work progresses they are constantly asking, ‘Are we getting the results we want to see? Or is it time to adapt and improve?’ And, telling the story of what change looks like in communities is increasingly being recognized as an essential part of impactful social change strategies. 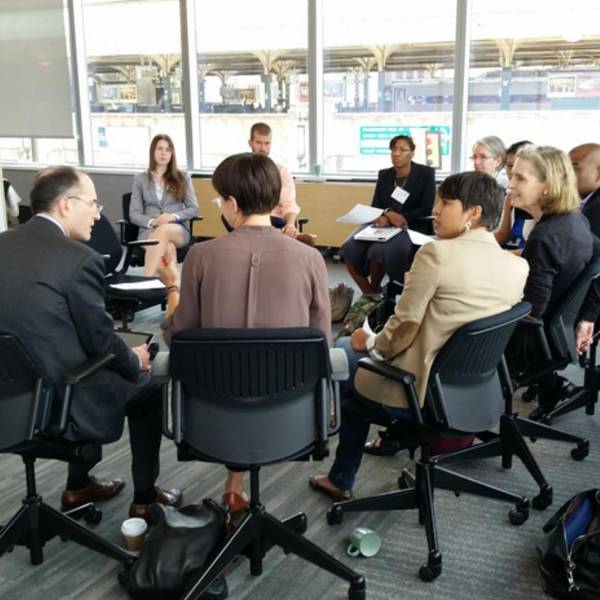 Our CEO shares his big takeaways from our #NewUrbanPractice Summit that brought together leaders, dreamers and doers for an active process of co-design around what it will take to dramatically improv…

Empathy: “The aesthetic exploration of the possibility of forms of empathy… [can] transcend national boundaries.”

Lastly, Mockus raises the importance of bringing empathy back into the public process. We know Mockus is speaking of Bogota when he makes this statement, but it rings true to me for the United States as well.. When he talks about ‘reducing the gap between the formal field of law and the informal realm of culture’ with empathy, he could easily be talking about our criminal justice system as it has played out recently in Ferguson, Staten Island, or Baltimore. While it is possible to debate the legal facts of each of these cases, the execution of laws without empathy undoubtedly violates the informal realm of our culture.

Fundamentally, Mockus reminds us that “changing a city is not the greatest political challenge; sustaining that change is. His lessons on community engagement, results and empathy give us a playbook to do just that.