From Theory to Practice: Three Lessons on Equity and Collective Impact

From Theory to Practice: Three Lessons on Equity and Collective Impact 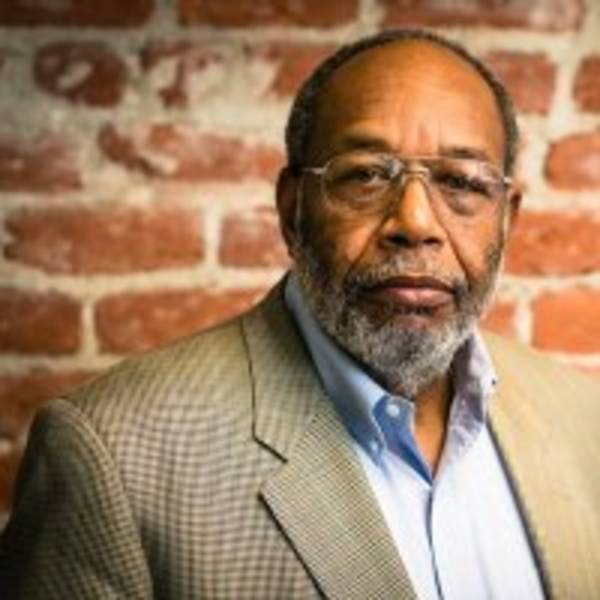 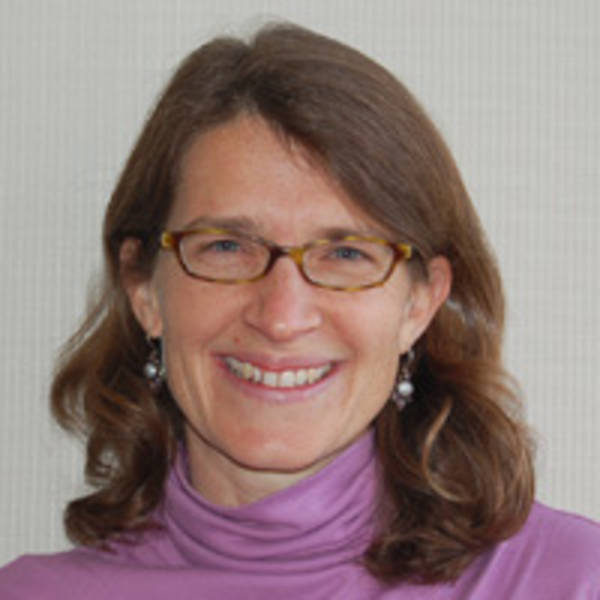 This is the second of a two-part series on insights about equity in collective impact emerging from Urban Strategies Council’s work in Oakland, CA, exploring how the process of working together with an explicit equity agenda across communities and systems can strengthen very local, grassroots efforts in specific ethnic communities and, simultaneously, build system and community-wide capacity to identify and address disparities.

Urban Strategies Council’s approach to equity draws on john powell’s work on targeted universalism. Targeted universalism links universal goals (e.g. all young people are prepared for adulthood) with strategies that specifically address the circumstances of those experiencing the greatest barriers to achieving those goals (e.g. boys of color in low-income communities). By systematically asking who experiences the poorest outcomes and why, and then changing policy and practice to address the relevant barriers, communities using targeted universalism can continually surface and respond to emerging disparities while improving community-wide outcomes.

The Oakland-Alameda County Alliance for Boys and Men of Color (the Alliance) is an example of targeted universalism in practice. In 2011, the Council facilitated the formation of the Alliance, a cross-sector collaborative of public systems and community partners using a collective impact approach to improve health, education and employment outcomes for boys and men of color.

Using a gender-ethnic lens and focusing on boys and men of color took courage, particularly on the part of leaders of public systems such as the school district and the county social services, probation and health care services agencies. Explicitly focusing on the issues of boys and men of color was potentially risky for two reasons. First, because the “colorblind” approach, that treats racism as a matter of individual bias best remedied by ignoring race, is all too common. Second, because of the misconception that in post-Proposition 209 California, it would be legally impermissible to target specific racial/ethnic groups with public resources. The willingness of Alliance members to work on these issues across communities and sectors in spite of discomfort has made progress possible.

The initial impetus to focus on improving outcomes for boys and men of color was made possible by disaggregating important performance and outcome data by race/ethnicity and gender simultaneously, a new approach for many of our partners. In addition to the issues that face girls and boys of color alike – such as being more likely than their white peers to live in poverty, to be exposed to community violence, and to attend low-performing schools – the disaggregation of data shows that boys and young men of color in Oakland face particular challenges on the path to adulthood: Fewer than one in three Pacific Islander, African-American, and Latino male students were proficient in English Language Arts in 2012-13. Among middle school students, one in four African American males and one in five Pacific Islander males were suspended from school in 2012-13. Native American and Pacific Islander males had the lowest graduation rates (38% and 39%, respectively), followed by African-American males (52%) and Latino (54%) among males of all racial/ethnic groups in OUSD in 2011-12.

As is true in many places, data about many smaller ethnic communities often are not available in Oakland and Alameda County. In some cases, the data simply are not collected (e.g. when a form offers the option “Asian” but does not ask for specific ethnic group), and in other cases, the small size of a community makes data about them statistically unstable. By raising questions and sharing their experiences, community-based organizations active in the Alliance have brought visibility to issues facing, for example, Southeast Asian, Native, undocumented immigrant, and transgender boys and young men. When leaders of public systems and members of marginalized communities regularly work together, they jointly can increase understanding and create better targeted strategies to improve the outcomes of those who face the greatest barriers to thriving.

3. An Equity Lens in Public Systems

The common understanding of equity that Alliance members developed by systematically addressing barriers facing boys and men of color have influence beyond the Alliance. For example, when partners in the Oakland-Alameda County Opportunity Youth Initiative were designing their plan to reconnect opportunity youth to education and family-sustaining career employment, they asked “Which opportunity youth face the greatest barriers to re-connection?” From that conversation came a particular focus on cross-over youth – young people who have been involved in both the child welfare and juvenile or criminal justice systems.

Making a practice of disaggregating data by gender and ethnicity…will bring to light additional disparities.

Making a practice of disaggregating data by gender and ethnicity – as well as by other important characteristics such as income level, immigration status, neighborhood, and disability – will bring to light additional disparities. In this way, the practices and policies of public systems that initially grew out of the boys and men of color work can grow into a multidimensional equity effort. For example, the practice of disaggregating suspension rates by ethnicity and gender revealed not only that boys in every racial/ethnic group in Oakland schools were more likely to be suspended than same-race girls, but that African American girls had among the highest suspension rates of all student groups. (See below.) 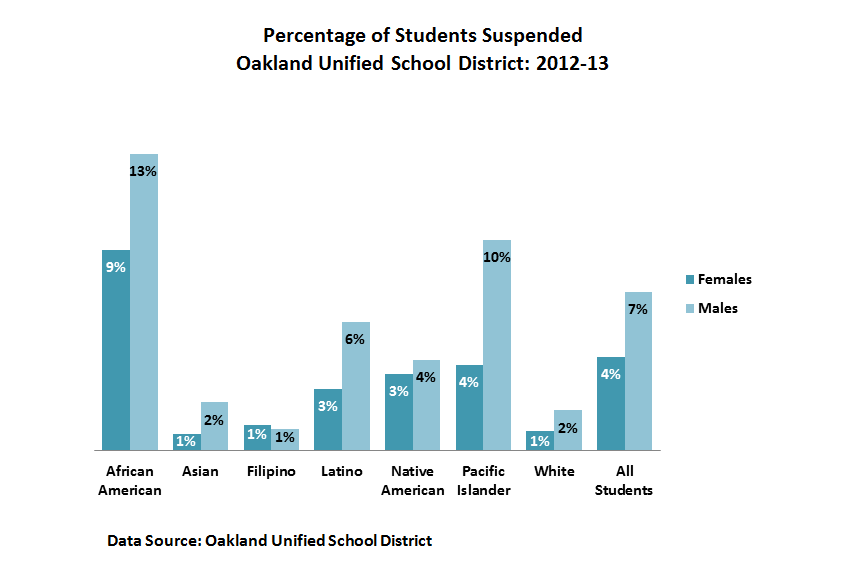 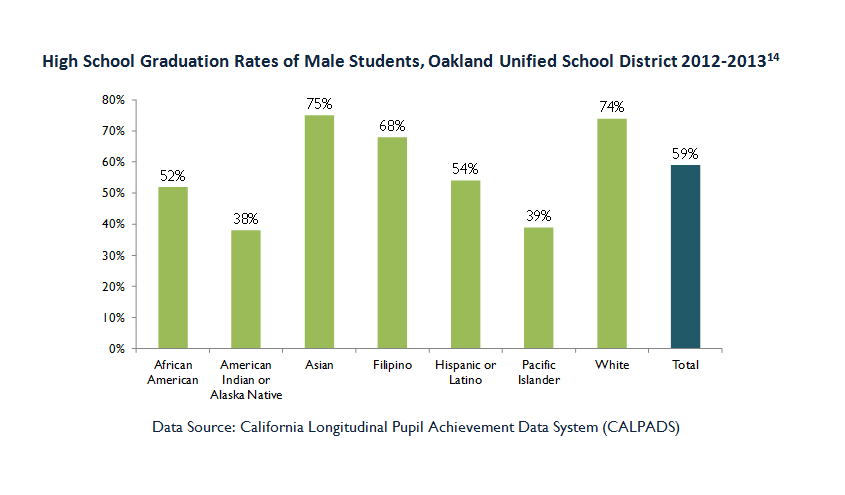 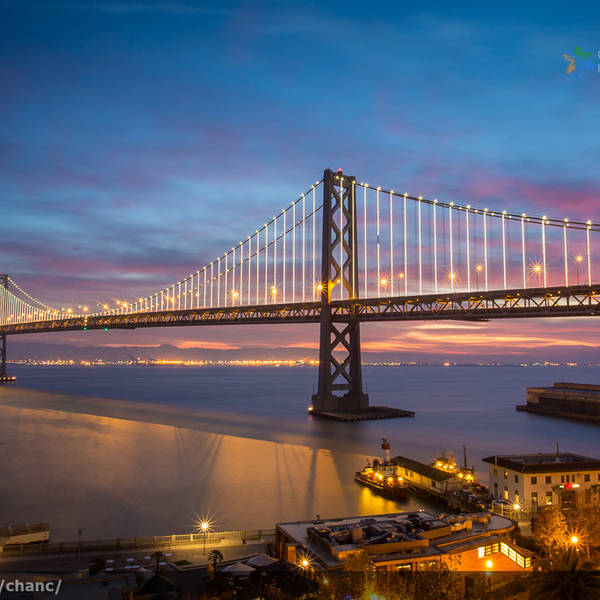