#BensTake: It’s the Economy (and The Future of Our Democracy), Stupid

#BensTake: It’s the Economy (and The Future of Our Democracy), Stupid

Addressing financial insecurity among people of color is key to ending wealth inequality, bolstering our economy, and reinvigorating our democracy.

“The analysis of wealth leaves no doubt regarding the serious misrepresentation of economic disparity that occurs when one relies exclusively on income data. Blacks and whites with equal incomes possess very unequal shares of wealth. More so than income, wealth holding remains very sensitive to the historically sedimenting effects of race.”

Nearly 20 years ago, in 1997, I read these words in Melvin Oliver and Thomas M. Shapiro’s Black Wealth/White Wealth, and was blown away. Whether I was naïve or just blind to this reality, Oliver and Shapiro’s qualitative and quantitative research painted a harrowing portrait of how black people in America have struggled to keep up with their white counterparts on an uneven playing field. I remember one statistic in particular that stunned me: While black suburbanites often earned as much as their white peers, the total sum of their assets was pitiably lower. This was due, in large part, to the fact that they had little to no wealth passed down to them from prior generations. Oliver & Shapiro documented many reasons for this, dating back to slavery and FHA underwriting, but the wealth disparity was striking. Significantly, these realities made it so that home equity is often African Americans’ most important asset, and the greatest source of their accumulated wealth. Home ownership for black families was both an entryway into the middle class, and an anchor preventing a drift back into poverty. At the time, these ideas from Black Wealth/White Wealth were eye opening for me and for many, many others in the social change field.

Over the past two weeks, it’s become shockingly clear that not much has changed since that time – and maybe even gotten worse. The Washington Post published an extensive series called “Dashed Dreams” focusing on the devastating impact that the Great Recession and foreclosures have had on black wealth in Prince George’s County, Maryland; the nation’s wealthiest majority-black county. The series painted a picture of African Americans with higher income than many Americans but particularly vulnerable to economic insecurity, and mired in some toxic combination of mortgage, student loan and personal debt.

43% Since the Great Recession, black homeownership has dipped under 43%

In fact, the series cites the fact that the black homeownership rate has dipped under 43%, and the homeownership gap separating blacks and whites is at levels not seen in a century. Unlike at the time that Oliver & Shapiro wrote their book, today there is a huge disparity between the number of whites and blacks who are ‘underwater’ or who owe more on their mortgages than their homes are worth. Federal Reserve data shows that the effects of predatory lending and lagging home prices in minority neighborhoods have resulted in 14.2% of black families having underwater mortgages vs. 5.5% for whites in 2013.

The fact that these conditions are not unique to Washington, D.C. suburbs was made abundantly clear via an analysis released by the Urban Institute last week. This analysis, Nine Charts about Wealth Inequality in Americas, showed, among other things, that while whites had five times more wealth than black families in 1983; by 2013, the gap had risen to seven times as much nationwide. 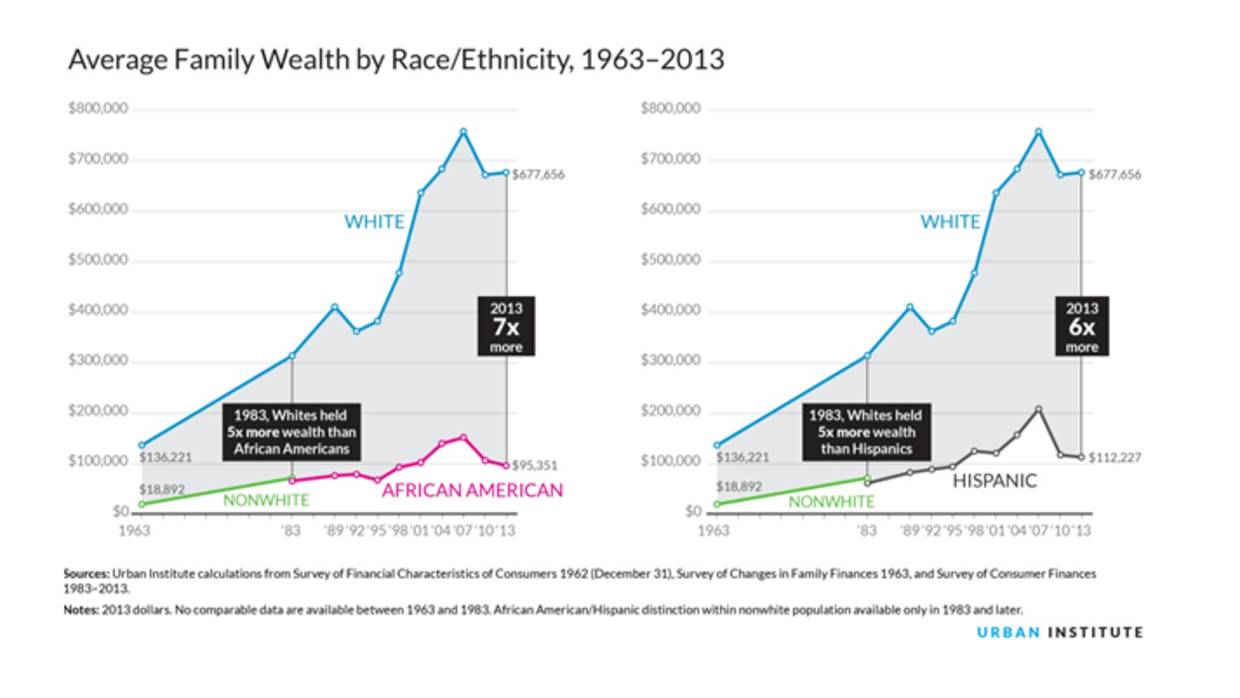 As the chart above shows, this is not just about whites and blacks. It’s about the future of our country. Disparities between white and Hispanic wealth also have grown, not shrunk, since 1983. Without intentional and substantial strategies to turn this tide, we will be a majority non-white nation in 2040 with very little financial stability and increasing levels of poverty. Why does that really matter? Here’s why. Fundamentally, it’s about the economy. 70% of all economic growth in the U.S. is driven by consumer spending. An economy comprised mostly of financially instable consumers is a substantially weaker economy than the one we have now. People of all races and income levels, especially those with children, have to be concerned about that. But it’s also about our democracy. Recent Pew studies showed that financial security is strongly correlated with nearly every measure of political engagement: registering to vote, voting, contacting elected officials, even basic awareness of issues.

Unlike some other problems that we face, this one is not intractable. We actually know how to help people build wealth. We’ve had incredible success helping people of color become homeowners through responsible subprime mortgage lending programs run nationwide by lenders such as Self-Help Credit Union. These are fixed-rate loans made with strong underwriting guidelines (e.g. documenting income and the borrower’s ability to repay their loan) to borrowers who do not fit conventional lending guidelines; priced substantially lower than other subprime mortgage loans, with no prepayment penalties, etc. We need to do more of it and not conflate these loans and programs with the irresponsible subprime lending done in the wake of the crisis.

And we need federal policy to insure that people of color and low and moderate-income families have equal access to credit at reasonable and responsible terms. Since the Great Recession, these Americans have continued to receive a far lower share of mortgage loans than they have historically. The Center for Responsible Lending captures the problem perfectly: “The persistent failure … to serve these borrowers is a troubling sign as it has been projected that nearly half of first-time homebuyers in 2025 will be households of color.”

Additional efforts, highlighted in The Urban Institute analysis, also have evidence supporting their efficacy in addressing financial insecurity such as limiting the mortgage interest tax deduction and using the revenues to provide a credit for first-time homebuyers; reforming safety net program asset tests, which can act as barriers to saving among low-income families; promoting emergency savings with incentives linked to savings at tax time.

The enormity of the challenge requires us to take action now and see that those actions are moving the needle on the problem, in real time. We can’t wait another 30 years to ‘check back in’.