At the Table Profile: How Tracey Nichols is Transforming Cleveland (Despite the Recession)

At the Table Profile: How Tracey Nichols is Transforming Cleveland (Despite the Recession) 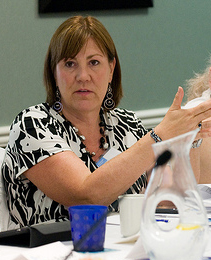 In 2008, Tracey Nichols was serving as Cuyahoga County’s Assistant Director for Economic Development where she was nationally recognized for her work on brownfield redevelopment. But that year, two years into the tenure of Cleveland’s Mayor Frank Jackson, she picked up the phone, “I called the City and asked to join the economic development department because I live in the City and I care about it. I thought the Mayor was doing a great job and I wanted to join the team.”

That same year, Nichols was named the Director of Economic Development for the City of Cleveland. In this role, she’s built a lean and efficient staff, strong relationships with key stakeholders within and outside of government, worked with the local community to catalyze the transformation of Euclid Avenue into a Health-Tech Corridor, and played a key role in shaping and leading Cleveland’s Integration Initiative work—the Greater University Circle Wealth Building Initiative.

When Tracey Nichols joined the Mayor’s team, she was eager to start working on projects, but it was 2008, the economy was bottoming out, and so she turned her focus to making her department more effective and efficient. Nichols notes that her biggest roles are, “setting the goals, getting people excited about doing economic development in Cleveland and showing them how they can contribute to the community.”

Recognizing that the term economic development is widely used, but poorly understood, Nichols developed an accessible definition, “Economic development is about creating jobs and new investment in the community. You have to use a simple definition because we’re going out and meeting with a community that includes everyone from the least sophisticated individual to the most sophisticated individual. Everyone can understand creating jobs and creating new investment in the community.”

Tracey Nichols also recognizes the importance of building relationships with others within and outside of government to meet the City’s economic development goals. She recounted, “Not only do I deliver the goals and expectations to my staff, but to the CDCs, the economic development organizations, our partner agencies, and the developer community. The brokerage community was one of the first groups I reached out to when I got here. These are the people who are selling our city. They are either telling businesses ‘that’s in the city, you don’t want to go there,’ or they’re telling businesses, ‘They have great programs, you want to be in the city, they’re really helpful.’ So, the brokerage community was a really important constituency. Helping turn around their view of the city has been really important and helpful.”

Nichols knows that her department is about more than attracting and growing businesses in the City, “Mayor Jackson says that we are the one-stop shop for businesses, so it doesn’t matter if a business has a complaint about another city service or needs business assistance. Whatever it is, people can pick up the phone and call us and we’ll get to the bottom of it and help them figure it out.” In addition to helping businesses solve problems, she is also an ambassador for other government departments. Recalling early in her tenure when the Building and Housing Department, under a new director, was making improvements, Nichols encouraged her team, “to spread the word that the City was cutting back the length of time it takes to get a permit,” and allocated some grant funds to help them upgrade their technology systems and provide paid interns.

Tracey Nichols believes government should be a good partner that is flexible and creative. While some may scoff at this assertion, she’s walked the walk. Having built a strong team at the Department of Economic Development, and meaningful relationships across city government agencies and with other key stakeholders, she didn’t shy away from bold ideas in the midst of the bad economy. She recognized an opportunity along Euclid Avenue, one of Cleveland’s main thoroughfares that connects University Circle (home to Case Western Reserve, University Hospitals and the Cleveland Clinic) and Downtown Cleveland, the City’s central business district. A bus rapid transit line connecting the two neighborhoods opened in 2008, though, ample vacant and underutilized land remained between the two neighborhoods.

Nichols wanted to build on the strength of University Circle and Downtown Cleveland. In her first year at the City, she developed a strategy, “We needed a catalytic project to get the Health-Tech Corridor moving, we needed post-incubator space and we found that those high-tech companies wanted a campus-like setting. To bring this to the area, we needed to build a spec building. So in the worst economy, I went to Mayor Jackson at the end of 2008 and I said we need to build a spec building, banks aren’t going to invest in it, and I need $9.7 million dollars of HUD 108 funds. After asking many questions, the Mayor recognized the impact of the project, agreed the Developer’s guaranty was strong and said ‘go ahead and make it happen.’ And we started to have momentum.”

Nichols is a Boston native, but has lived in Cleveland for over 30 years. She calls the town “the biggest small town in the country.” In 2009, she heard that there was a project to develop a laundry cooperative that would be owned and operated by residents of Cleveland’s neighborhoods. She was intrigued, and did what she’d done a few years earlier with Mayor Jackson—she picked up the phone and offered her resources, this time in the form of funds that she had available at the Economic Development Department. She learned, “they had gone to the bank, and the bank had said great idea, but you’re a start-up and we’re not going to do it. And that’s a role that government can play, we can take a bit more risk, and we can help out where sometimes a bank can’t.”

Through the laundry, Nichols developed a relationship with Lillian Kuri and India Pierce Lee at the Cleveland Foundation, who had been working on efforts since 2005 in Greater University Circle to leverage institutional investments for the benefit of the community. Nichols, Kuri and Lee continued to meet and develop strategies for creating opportunity in Cleveland. And in 2010, the Living Cities opportunity became available so they rounded up a set of partners, submitted an application and months later learned their site had been selected for The Integration Initiative.

Among other strategies, the Integration Initiative is helping the Cleveland team keep the momentum of the Health-Tech Corridor going and furthering its development. In addition to the financial support, Nichols notes that, “With the Living Cities award came this incredible convening power with all the institutions.” She added, that the technical assistance and learning exchange opportunities with other sites, “give me the ability to be plucked away from my environment here, which is continual problem-solving all day long, to a situation where I could actually think and plan and come up with ideas.”

Tracey Nichols’ efforts exemplify the work that Living Cities aims to support through The Integration Initiative. In her time as Director of Economic Development at the City of Cleveland, she’s collaborated across sectors to address complex challenges, and helped to transform how economic development works in Cleveland. She’s tested innovative ideas, and helped direct funding toward the ones that can be taken to scale. In the city that is home to the Rock’n Roll Hall of Fame, she is a rock star. So, if she calls you up, make sure to pick up the phone.