Making Cities More Playable for All

Making Cities More Playable for All

A Conversation with Ben Hecht and Darell Hammond

At Living Cities, we spend a lot of time thinking about how we can better connect all city residents, especially low-income residents to opportunity and ‘essential services.’ We think of essential services as those that have profound effects on people’s economic well-being, health and overall quality of life—things like healthcare, childcare, grocery stores and quality education institutions. Another often overlooked element that is deeply relevant and interconnected with these services is access and opportunity to play.

Recently, Darell Hammond, CEO and Founder of KaBOOM! and long-time friend of Living Cities, wrote an op-ed for the Huffington Post in which he asserted that “to attract and retain the businesses, jobs and residents who breathe energy and enterprise into their neighborhoods, cities first need to foster family-friendly, kid-friendly environments that promote play everywhere, while addressing the needs of underserved communities.”

Indeed, play is essential for kids' health and wellness. It builds muscles, expands minds and forges friendships. If we hope to create more vibrant cities, and to support the success of every child from cradle to career, we would do well to support an increase in what Darell has coined ‘playability’: the extent to which a city makes it easy for all kids to get balanced and active play.

We are intrigued by this concept and are excited by the traction that it is gaining in the world. We wanted to hear more about it from Darell, and to discuss ways in which advancing play and playability can be a key element of a wide variety of strategies aimed at improving the economic competitiveness of cities and improving the health, safety, and sense of community of residents, among other important goals. So, we asked Darell and our CEO, Ben Hecht, to brainstorm around these ideas. Below are some highlights from that conversation.

Darell: Cities today are really focusing on how to attract and keep the ‘creative class’ in cities. When folks in the creative class start to have families, however, the infrastructure and amenities, including access to play, often aren’t enough to make them want to stay. We know that these folks are key drivers of local economies, so this is a very important issue. In addition, we also need to focus on low-income families. We currently have inequitable distribution of services, resources, and opportunities for low-income families. And, this inequity serves to perpetuate the cycle of poverty that threatens our nation’s economic future.

Ben: Exactly. Living Cities is trying to support a new type of urban practice to dramatically improve the economic well-being of low-income people, and to ensure that they have access to opportunity and services. The pace at which this is currently happening is too slow, and the scale is too small. We need to have the impatience to find and support ways of faster, more meaningful, change. In terms of playability, when you look across the spectrum of ways that cities are innovating, from bike lanes and bike share to community gardens and art spaces, you don’t often see them happening in low-income communities. And, there are often other obstacles to low-income people accessing them, such as the need for a credit card to participate in bike share programs.

Darell: In DC, we have 71 miles of bike lanes, but virtually none in Anacostia where a large percentage of low-income people live. This type of reality is true in low-income communities across the country. And, there is inadequate funding, creativity, and desire to change this.

Ben: In the wake of foreclosure crisis, many cities, like Detroit for example, have so much vacant space these days that are ripe for the kind of creativity you’re looking for. That land can be used for playgrounds, public art, urban farms, and the like. There is so much potential. But, as you said, it will require us to raise awareness and the political will to reimagine what our cities can look like and to ensure that we approach the work of reimagining with an intentional focus on equitable access. Too often, parks and other spaces that could create great value to the general public become private projects. The wealthy support them and thus benefit most from them while lower income people are left out.

Darell: And, people too often think about play as an individual responsibility rather than a societal or community responsibility. In that sense, play becomes a lower priority for mayors and other civic leaders. How do we make this an urgent priority?

Ben: I think there are ways to bring people along in their understanding of this issue by tying play to other important outcomes: things like health and wellness, energy efficiency, and community building.

Darell: Definitely. And, also challenging preconceived notions– making play the easy or default choice for children and families. KaBOOM! is working on increasing the understanding that play can happen anywhere in a community. Moments of downtime, such as standing in line at a grocery store or waiting at the laundromat, can become playable opportunities where kids are both welcome in those spaces, and those spaces turn what otherwise would be moments of frustration into creative, playable moments of joy. The unexpected can be powerful, and also decreases the tendency to think about play only in the context of building new infrastructure. 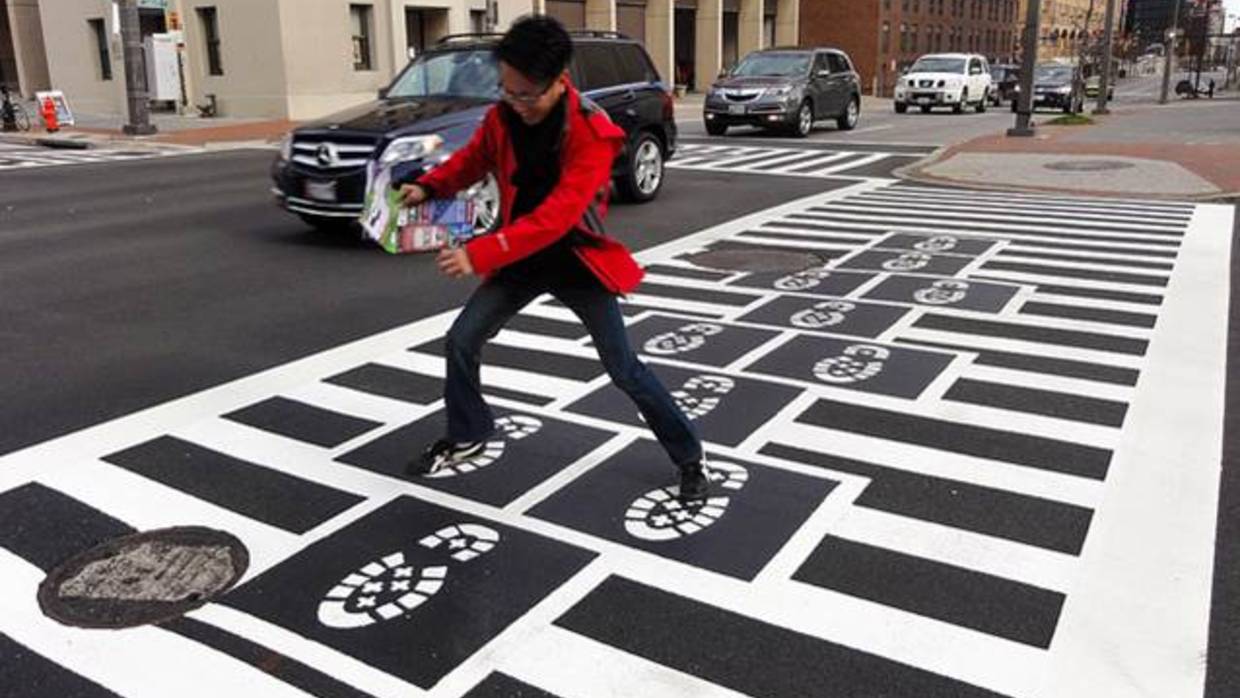 A man plays hopscotch across a playable cross-walk in Baltimore, MD.

Ben: I love that idea. What are some other challenges to fostering playability?

Darell: There is an inherent struggle with this work because there are some traps that cities can fall into when looking at playable solutions. People often want a pilot project just for the sake of having a pilot project. They introduce something just to try it out without a longer term, comprehensive, plan. In these cases, low-income people are, again, the last to benefit.

Ben: This is true of so many city policies and programs. We need to support efforts that bring together cross-sector leaders who come together and agree upon shared ambitious results. This requires new models of distributed leadership. I am encouraged by efforts that I’m seeing in many cities towards this type of decision making.

Darell: Yes. In that way, it also becomes clear that it’s not really all about money. We just need to spend the money we have more effectively and equitably to create family-friendly cities that benefit all kids.

Ben: At the end of the day, cities that work in this way to foster things like playability that can help attract new residents and improve the lives of residents who are already there will better position themselves to be economically competitive.

Darell: That’s exactly right. And, we need to acknowledge that it’s a long-term game. We have to make the investments now in order to see better outcomes for children and families in the future.