Secretary, Gregory Bialecki, shares sights on the role of the State of Massachusetts in the Working Cities Challenge.

Living Cities believes that to improve the lives of low-income people, the public sector must be an effective, collaborative partner in collective impact initiatives like the Working Cities Challenge. Launched last May by the Federal Reserve Bank of Boston and modeled after our Integration Initiative, the Working Cities Challenge is an effort to catalyze cross-sector civic collaboration to improve the lives of low-income people in Massachusetts' small cities. 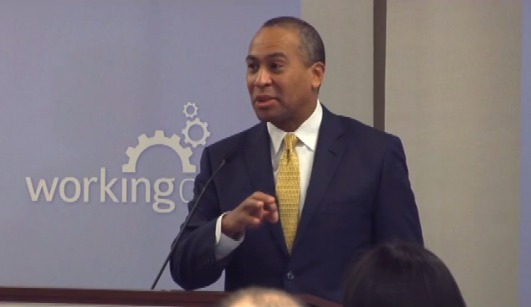 The competition brought together a cross-sector group of leaders including the former Federal Reserve Chairman Ben Bernanke, Massachusetts Governor Patrick, and the Boston Fed’s Eric Rosengren and culminated last January with six cities winning a total of $1.8 million in grants.

The Commonwealth’s Executive Office of Housing and Economic Development played a critical role from the inception of this effort and contributed over 25 per cent of the funding for the initiative.

In a recent interview with Living Cities, Secretary Gregory Bialeckiprovided some insights on the role of the State of Massachusetts in the Working Cities Challenge.

What drew Massachusetts state government to focus on these Working Cities?

In 2007, a study by the Brookings Institution and MassINC identified a cohort that they called “Gateway Cities.” It highlighted the importance of good governance and coordinated investments in education, workforce development and economic development to help cities adapt to new economic realities. The study also revealed that while these cities have seen modest gains in population and job recovery over the past decade, they are increasingly lagging the state average for income, unemployment and educational attainment.

We saw the a real opportunity for our Working Cities through research conducted on small cities by the Federal Reserve Bank of Boston. Their research found that regardless of challenges cited in the Brookings study, eight cities out of a peer group of 26 nationwide were able to either maintain or recover much of their economic stability, as measured by income, reduced poverty rates, population and economic vitality.

Several factors drove the rebound of these “resurgent” cities: collaborative leadership, the role of anchor institutions, investment in infrastructure and extension of benefits to the community as a whole. Of these, collaborative leadership – the ability to work together across sectors over a sustained period with a comprehensive vision – was most critical.

How has the Commonwealth invested in these working cities?

The Patrick Administration has made major investments in housing, education, open space and infrastructure in the Working Cities over the past eight years. These investments have been in specific sectors such as affordable housing or education, each of which convenes effective coalitions.

However, just like every stakeholder in each of these cities, we saw the limitations in these sector investments. We wanted to seize the opportunity to do more and engender a more multidisciplinary approach. For that reason, we are proud to be investors in the Working Cities Challenge. We perceived the Working Cities Challenge as a groundbreaking effort to support leaders who are reaching across sectors to ensure that smaller cities in Massachusetts are places of opportunity and prosperity for all their residents.

Another critical reason we joined this coalition is a shared approach to moving these cities forward. In their proposals, the selected city teams built their initiative on their city’s competitive assets, amplifying what makes them strong as a tool to overcome their weaknesses.

Finally, we were honored to be a part of such a strong partnership that includes – the Federal Reserve Bank of Boston (acting as the project manager), Living Cities, Boston Community Capital, and the Massachusetts Competitive Partnership – joining together to improve the lives of some of our most vulnerable citizens.

Gregory Bialecki is Secretary of Housing and Economic Development for the Commonwealth of Massachusetts. Secretary Bialecki has oversight of 14 state agencies that carry out on the Administration’s top priorities in business development, housing and community development, consumer affairs, and business regulation.