Living Cities is open sourcing our 2014 annual report, asking folks to respond to the question: “What will it take to achieve dramatically better results for low-income people faster?” In our efforts to showcase a diversity of points of view around this question, we are resurfacing this blog, among others. Look out for more to come – and follow the conversation on social media with #NewUrbanPractice.

At Living Cities we believe the public sector- with its significant resources and influence- is a critical player in helping to create economic opportunity for low-income people in cities. As a result, we believe that working with city governments to advance innovation in the way they operate, collaborate and deploy resources is an important lever to creating change.

I recently sat down with former three-term Minneapolis Mayor R.T. Rybak (who is working with Living Cities as a part-time Senior Advisor) to discuss some of the innovative initiatives he led in Minneapolis during his time as Mayor. Our conversation reflects Rybak’s leadership innovating in the areas of public sector operations, collaboration and resources. 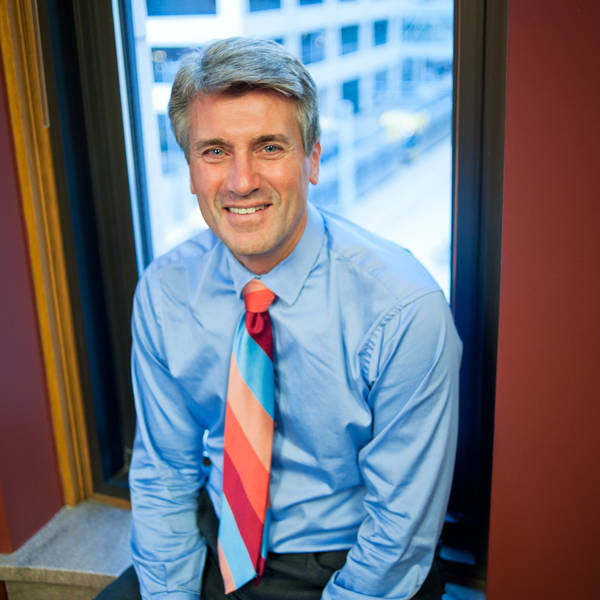 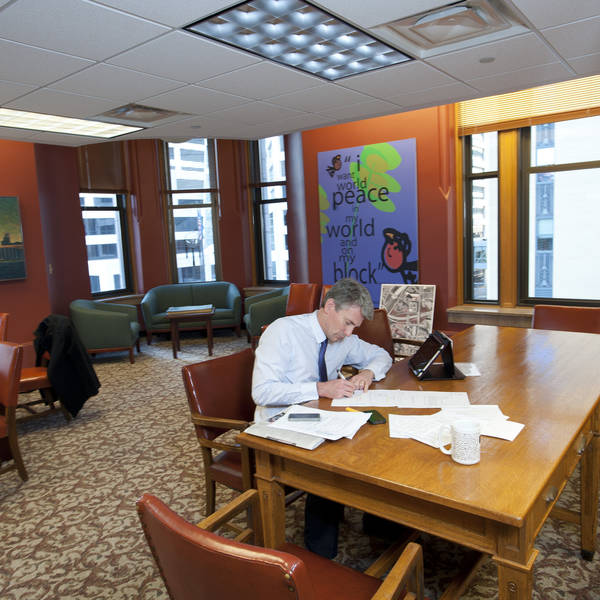 Former Mayor of Minneapolis, R.T. Rybak, while in office.

During your time as Mayor of Minneapolis, the opportunities to harness data and civic technology in city government have grown considerably. Can you describe some ways that the use of data enhanced city government’s interactions with city residents and helped to address important challenges?

In 2006, we began to use data collected through our 311 system to map graffiti complaints. We quickly saw a pretty clear linkage between this data and localized patterns of crime. In response, we developed a micro grant program to help communities to reduce gang-related graffiti, and there was a correlated drop in crime. An analysis of 311 data also revealed that streetlight outages were being disproportionately reported in more advantaged parts of town, which meant more services were being directed to address those outages, rather than those going unreported in less advantaged parts of town. This allowed us to begin adjusting our budget to target resources to streetlight upkeep in those under-reported areas, ensuring a more equitable distribution of services in the city. Using 311 in these ways helped to shift the culture from government as television (one-way communication) to government as telephone (two-way dialogue).

Beyond the use of data, what are some other ways that you worked to modernize city government operations in Minneapolis?

When I came into office, our economic development entity, planning department, workforce services and small business services were all housed in different corners of local government. McKinsey & Company helped to develop a plan, which we largely implemented, to bring those functions within a single, unified economic development agency. This enables, for example, a small business that wants to move into a newly developed piece of property to essentially have a one-stop shop, where all of the functions around the table can consider the small business’s situation, surface issues and make decisions in a unified and coherent fashion, rather than asking the small business owner to go through multiple parallel (or sequential) processes. It has greatly streamlined processes and limited red tape for entities that are ultimately going to provide jobs, tax revenue, and other positive contributions to the city.

It goes without saying that one of the biggest ways that the public sector affects the lives of low-income people is in the way it use its resources. What are some examples of ways you worked to more creatively attract, combine, and deploy resources from within city government?

In 2006, there was a big uptick in crime in Minneapolis. To tackle this new challenge, one option would have been simply to rely on a downstream measure: putting more cops on the street. We certainly did some of that, but using funding from the General Mills Foundation, other philanthropic entities, and eventually a bit of federal money, we instead invested in upstream interventions as part of a blueprint for reducing youth violence. We directed resources towards preventative services, mentorship programs, and early interventions in response to warning signs. By combining public and private dollars and directing them towards root causes of violence, we were effective in reducing incidents of crime and preventing the spread of violence in the city.

In a very different domain, we had an issue with combined sewer overflow in the city when I entered office. The old way of solving this problem would have been to focus exclusively on building more pipes. Instead the city decided to enhance green stormwater infrastructure – putting, for example, green roofs on City Hall and the new public library, and also providing a tax credit for the adoption of more permeable surfaces. This ended up creating a more systemic, lasting solution to this seemingly isolated issue, and has been a much more cost-effective use of resources.

Although we live in a world and time of unprecedented hyper connectivity, a willingness and capacity to collaborate across departments, agencies, and sectors is still something that many in the public sector wrestle with. Can you tell me about some of the collaborations you were a part of in Minneapolis city government? Were the outcomes of this work different as a result of their collaborative nature?

During the recession, a cross-sectoral initiative called the Itasca Project forecast that there would be an upcoming workforce shortage, and that most of the population growth in Minneapolis would be among communities of color (where there too often have been achievement gaps). The findings of the Itasca Project, itself a collaborative of public, non-profit and business organizations, led to the creation of or alignment of a number of collaborative efforts intended to combat this rising challenge, including the Greater MSP Regional Economic Development Partnership and Generation Next education effort. The results these collaboratives can expect to achieve are far greater than any single entity might hope to see on their own.

Another collaborative effort that I’m proud to have been a part of is the work on the Central Corridor light rail transit. Various sectors including the public sector and philanthropy (and Living Cities through the Integration Initiative have played an important role here. To cite just one example, the collaborative partners were very important in helping to get underrepresented communities engaged around the planning process. This led to decisions within the public sector to direct resources towards providing amenities that better link the transit line to the surrounding neighborhoods. The table of invested players that has been built as a result of this work has provided capacity that can be used on an ongoing basis.