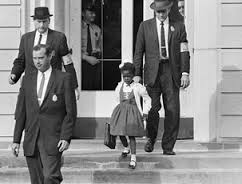 This month marks 60 years since the Supreme Court ruling in the Brown vs. Board of Education case. That landmark decision changed the course of history for African-Americans who had been systematically excluded from an education equal to their white counterparts. Brown was a hard fought battle many years in the making, led by some of our nation’s greatest civil rights and social justice heroes. They had great hopes for the future of African-Americans who had been enslaved for over 200 years and then kept in another form of slavery through laws that limited their access to education, voting, housing, and economic opportunity. The dream of those who fought for Brown was that access to white schools that had better resources would lead to increased economic opportunity for African-Americans. Since Brown, for so many African-Americans, those dreams have come true. Without a doubt, the Brown decision opened up opportunities for many African-Americans, including the Howard and Harvard educated writer of this blog.

But as we reach this historic marker, I am forced to look both backward and forward and ask the hard questions my high-school Black History teacher Mr. Henderson would have challenged me to ask. In his authoritative voice he would remind us that – “History is HIS STORY…if you don’t know your history you are bound to repeat it or be defeated by it.” The hard questions that come up for me are uniquely challenging and exciting given that Living Cities’ has recently embarked on a journey towards more intentionally and strategically incorporating a Racial Equity and Inclusion (REI) lens into our work. Our CEO, Ben Hecht, has laid out the organization’s REI vision in a comprehensive memo to staff. In it, he noted that we are undertaking this effort because, regardless of all the strides that have been made, our nation’s most disadvantaged individuals and communities are overrepresented by people of color; and that social change organizations like ours must increase our ability to expand progress on racial equity and inclusion at the systems level. He also shared some of that thinking here. In response to that vision, a team of Living Cities’ staff has begun the process of figuring out how we move this vision forward into reality. Our team represents the gumbo that is America – we are White, Black, African, Latino, and mixed-race. We represent every level within the organization – a “rarity”, according to a diversity trainer I recently spoke with. We were also all born after many of the major battles for civil rights in this country were fought and won.

So back to those questions – when it comes to racial equity, how far have we really come in this nation? Why are so many of the schools that were desegregated by the Brown decision 60 years ago, now re-segregated and just as unequal? Why are the incarceration rates for black and brown men so disproportionate to those of their white counterparts? How should Living Cities adjust its approach to acknowledge those facts? What can Living Cities do to influence the dialogue about racial inequality and injustice? And why have the billions of philanthropic dollars already spent tackling this problem in one way or another not made as much of a difference as many had hoped?

These questions make my head spin and could be overwhelming without my belief in that nagging truth that has galvanized and sustained so many set to fight the mountain of injustice looming in front of them – that truth is that we must never doubt that a small group of thoughtful committed citizens can change the world; indeed, it’s the only thing that ever has. As we move forward, I’m sure this and many other tried and true battle cries will serve as our mantras. We invite you to join us on this journey. We will use this forum to share our progress, failures, and what we learn from others in the field. We also invite you to share your organization’s REI journey. Onward!