From Transit to Access: Three essentials for rethinking how cities connect their residents to opportunity

From Transit to Access: Three essentials for rethinking how cities connect their residents to opportunity 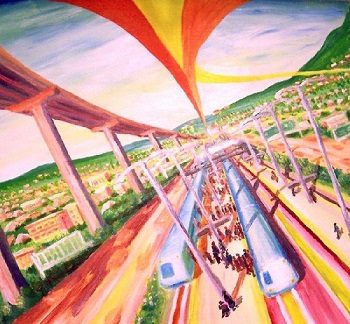 If we want to better connect all city residents to opportunity, we have to fundamentally change how we define the goal and how we work to get there. (Painting by Alfred Twu, http://www.alfredtwu.com/)

This blog post is written in response to a May 12, 2014 _ group blogging event, co-hosted by Meeting of the Minds & Living Cities, which asks, “How could cities better connect all their residents to economic opportunity?”_

America’s cities are the engine for national prosperity and individual economic opportunity. Indeed, for generations, low income people from around the country and the world viewed our cities as the best path to a better life. But in recent decades, that has been less true. Despite the billions of dollars being spent to tackle big challenges such as education, jobs, mobility, health, and housing in cities, we are failing to achieve the desired results, at the needed scale.

Why? Because once-in-a-lifetime developments, such as the internet and globalization, have fundamentally transformed the way people live and how the world works and we have yet to adapt accordingly. The systems that we always thought were going to produce more opportunities for the next generation than they did for the last, no longer do so. We need a New Urban Practice – a fundamentally different way of collectively defining and organizing towards our goals in order to move the needle on poverty and economic opportunity in cities.

Take, for example, the ways people access economic opportunities and essential services. Over the past half-century, the “geography of opportunity” – the borders within which people’s economic lives play out – has expanded radically from neighborhood to city, region and even the globe. Today, few people work, live and learn in a narrowly defined geographic area. Even if opportunities to further one’s education, or get a better job, exist in a region, it often takes too long to get to them, or it costs too much, or other barriers, such as lack of access to broadband or child care, get in the way.

Yet, despite these changes, our assumptions about how people access opportunity have remained largely static – tied to a mental model that causes us to repeatedly focus on one _means _of access, such as public transit, rather than on the _ends _we are seeking to achieve – ends which in fact may be better achieved through a broader range of means including but not limited to transit.

To get out from under the tyranny of this dead idea, we have to:

1. Move Our Mindset from ‘Transit’ to ‘Access to Opportunity.’

In the social change world, public transit has effectively evolved as a way to reduce carbon emissions and traffic. The new Transit Oriented Development Standard being proposed by the Institute for Transportation and Development Policy (ITDP) is a great example of that, “an answer to unsustainable, car-dependent, and transit-poor urban sprawl” that could have a significant impact on these issues. What it isn’t and will never be, however, is the solution for providing access to opportunity. Why? For both financial and geographic reasons, public transit, rail and bus, can never be built out sufficiently to get people everywhere they need to go in a reasonable time and at a reasonable cost. Moreover, transit is not always the access solution people are looking for. Some people may use public transit for access to some essential services and goods they need, such as jobs, but not others, such as groceries. Many low-income families in particular may not use transit much if at all: for example, a 2013 study of transportation patterns among low-income and working Latino families in Massachusetts found that not only did most use their own cars to get around, but one in six primarily relied on someone else’s _car.

It is not surprising that planners, advocates and others are disappointed at how limited transit, even when the land around it is developed for a mix of uses and incomes, has been as a vehicle for providing access to opportunity. Even while Living Cities has invested significant effort and resources in supporting the development of diverse and transit-rich communities (a subject my colleague, Amy Chung, takes up in her post today), we recognize that transit was not built for this purpose, and that it can’t accomplish this goal on its own. Understanding what it will take to ensure access to opportunity requires discussion and a set of decisions that lie far outside the traditional confines of any transit-focused effort or local agencies charged with making transit decisions. From our experience with cross-sector “collective impact” efforts like Strive Together and our Integration Initiative, these outcomes will require a much more diverse set of local actors coming together in new ways to take a bigger-picture view of both the desired outcomes and the universe of solutions, including but not limited to transit. We at Living Cities are working to change this mindset in our work and with our partners, but it is a work in progress.

This ‘access to opportunity’ focus requires local leaders to ask what social goals (e.g., jobs, learning, social capital building), they want people to achieve; which means of ‘access’ are most likely going to help them to achieve those ends; and how will they measure whether or not they achieved them. This is a very different approach from one that starts with the means, asking for example, “what social goals do we want to achieve from the buildout of a new high-speed rail line?” Defining success in this way would also likely result in very different local resource allocation decisions. Fortunately, in many cases, cities have more flexibility with these resources than they might think

Stephanie Pollack, a professor at Northeastern University, has done great work that shows that access can be achieved along three dimensions, although I take some liberties here in interpreting her conclusions:

Our ability to help local leaders measure whether ‘access to opportunity’ strategies are working will likely determine whether we can evolve away from a solely transit-oriented mindset. Currently, the fact that there is no standard or set of metrics for measuring access to opportunity is a significant barrier to expanding the lens in this way. We are looking for a coalition of willing local cross-sector partners who want to work with us over time, through trial and error, to build this standard.

The evolution from transit to opportunity will no doubt be accelerated by technology. Ubiquitous wifi, expanded fiber networks like those being promoted by Google Fiber and cutting edge partnerships like those pioneered by EveryoneOn (who have also written for this group blogging event) are making it easier to argue that access to jobs, learning and social networks through broadband should be as important to civic leaders in the 21st century as transit was in the 20th century. Similarly, open data and its applications, along with mapping capacities like those used by the Regional Planning Association in New York, are setting us on a course towards standard settings like, say, access to X jobs within a 45-minute commute, that can be measured in a cost effective way.

As Emily Badger of the Washington Post writes, “The ultimate goal of transportation isn’t really to move us. It’s to connect us – to jobs, to schools, to the supermarket. And recognizing this means viewing transportation in a different way.” We have to reimagine transit not as an end of itself but as one means of many in connecting low-income people to the essentials they need to succeed. At Living Cities, we are near the beginning of this effort, and we are proud to co-host today’s group blogging day with Meeting of the Minds as we engage new and long-time partners in refining our thinking and exploring how we might best make it real.

Ben Hecht ( @BenHecht) is President and CEO of Living Cities.