Announcing the Next Round of Living Cities Integration Initiative

Announcing the Next Round of Living Cities Integration Initiative

We have selected efforts in Albuquerque, New Orleans, San Antonio, San Francisco and Seattle/King County to participate in the next round of The Integration Initiative.

The pace of social change is simply too slow; the scale, too small. In 2010, Living Cities created the Integration Initiative (TII) to try to change that. We set out to work with a ‘coalition of the willing’- a cross-sector group of leaders from a limited number of cities - committed to learning how to achieve needle moving outcomes for low-income people. Each site incorporated four high-impact strategies into their work:

The problems being targeted by the efforts in each of the cities address many of the nation’s seemingly intractable urban challenges, such as workforce readiness & jobs (Baltimore), economic development (Cleveland), urban revitalization (Detroit), equitable transit-oriented development or TOD (Minneapolis/St. Paul), and education and health (Newark).

After three years, we have gleaned important lessons on realigning institutions across issues, sectors, and disciplines. We also have seen significant evidence pointing to enduring change. In the Twin Cities, for example, five local and state funding streams have been redirected to support the build out of a light rail transit system that will increase low-income residents’ mobility.

This past fall, Living Cities undertook a major exploration of new potential grantee sites for the second round of The Integration Initiative (TII). One of our goals for this work was to expand Living Cities’ geographic footprint. Since our current portfolio is concentrated in the Northeast and Midwest, we focused on identifying potential new sites in the South, Southwest and West. 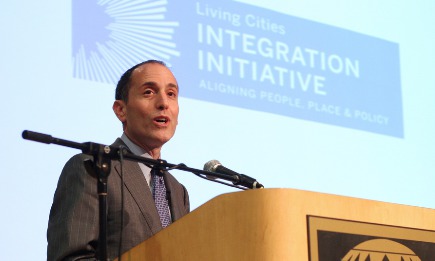 We considered 36 possible places, looking to identify local leaders who are committed to building a new type of urban practice focused on addressing inequality and disparate access to opportunity at a systems level.

Today, we are pleased to announce that we have selected efforts in Albuquerque, New Orleans, San Antonio, San Francisco and Seattle/King County to participate in this next round of TII. Each location will receive a $100,000 grant and participate in a one-year planning process, with the possibility of being invited to become fully participating sites and receive additional grants and loans. In addition, existing efforts in Baltimore, Detroit, Minneapolis-St. Paul and Newark will be awarded additional funding over the next three years.

TII shows us every day that civic leaders in cities across the country are not waiting for Congress or their state house to solve their problems for them. They are inventing new ways of working together, realigning resources to achieve better results and setting their cities on a fundamentally different course. We are committed not only to helping these cities to share their learnings with each other, virtually and through bi-annual learning communities, but to accelerate change in cities nationwide by disseminating real world lessons learned in real time on our blog and other social media outlets.