Is Pay for Success Collective Impact?

Is Pay for Success Collective Impact?

Is Pay for Success a forcing mechanism that can make Collective Impact tables work?

When I joined Living Cities almost a year and a half ago I was introduced to the concept of “Collective Impact”. It took me a while to understand what made it different from simply working together. Recently my colleague Tynesia Boyea-Robinson made it easy for me to (finally) understand (I think). If you are confused like I was, you should read her blog (written in plain English).

There are three things in tandem that make Collective Impact “innovative”.

1. A cross-sector partnership of both decision-makers and doers who

2. Have agreed to hold each other accountable to achieve a shared goal; and

3. Developed a feedback loop that tells them if they are on or off track.

When I read the above “requirements” of Collective Impact, I think of Pay for Success, an emergent and innovative financing and government contracting model that raises funds from private investors to pay for the provision of a service upfront and obligates government to pay for those services only if they achieve agreed-upon social outcomes within a specific timeframe . And I’ve been wondering, is Pay for Success a forcing mechanism that can make Collective Impact tables work?

1) Cross-sector partnership of both decision-makers and doers? The Massachusetts project has this one covered. 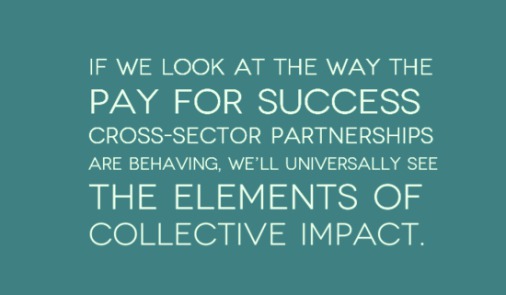 2a) Shared Goal? Not only is there a shared goal in the Massachusetts initiative but it’s clearly articulated – Reduce recidivism and increase employment for high-risk young men coming out of the juvenile justice system or on adult probation.

** 2b) Way to hold the partnership accountable?** Maybe it’s my bias as an economist, but financial incentives are a great way to hold people accountable. Everyone involved in the Massachusetts project has “skin in the game” and a vested interest to see the project succeed. Implementations of a complex policy solution is as intense and hard as constructing and closing the initiative; the shared goal and financial incentives are keeping everyone engaged and at the table as implementation gets underway and moves forward.

3) Feedback loop? Roca brought this into the project with them. One of the things Living Cities as an investor found compelling about this transaction was Roca’s long data-driven operating model. They have been a learning organization for years and they brought that discipline with them to this project. What was once a way for Roca to know whether they were on track and tweak processes and/or change directions if they weren’t has become integral to the operations of this Pay for Success “Collective Impact table”.

Living Cities launched the Blended Catalyst Fund, to invest in and test innovative approaches to solving urban problems. Here is some of what we learned through raising the Fund.

Although we were initially drawn to Pay for Success as an innovative way to use capital, we quickly realized that PFS can drive public sector innovation as well. A government champion is critical for…

First and foremost, we believe Pay for Success projects should help improve the lives of low-income people in American cities. With all of the new projects coming onto the market, the first question …