In recent years, data driven cross-sector partnerships have refined promising collective impact principles for tackling society’s largest, messiest problems. Here are some “keep it real insights” about what these principles look like in practice and what it takes to apply these principles effectively.

The short answer is yes! The long answer is not for the reasons people often think. The process of leveraging data to develop solutions that lead to desired outcomes is not what’s new. Your doctor does that when she takes your vital signs and prescribes medications. Your mechanic does it when he runs diagnostics on your engine and charges you way too much money to fix your car. Heck, even our fellow colleagues in the social sector use evidence-based decision making to improve their programs that fight hunger, homelessness, and other symptoms of income inequity.There are three things in tandem that make Collective Impact “innovative”.

When people hear “innovation” they often think “new”. But the fact is, while people have been convening cross-sector tables for years, they often didn’t agree on shared goals.

Wait, do you feel tricked? Do you not get what all the fuss is about if Collective Impact’s innovation is those three seemingly simple steps? Some of the challenge is that when people hear “innovation” they often think “new”. But the fact is, while people have been convening cross-sector tables for years, they often didn’t agree on shared goals. And on the off chance they did, the goals were usually modest so no one was embarrassed. And even if they did agree to something big, they rarely had a mechanism to show whether or not they were on track in real time. When you look at it that way, Collective Impact quite frankly rocks my socks.

My family and I are rabid Duke fans. One thing my husband often yells when the other team misses a shot is “ball don’t lie”. This passionately obnoxious comment is basically his shorthand for the fact that no matter how awesome you think you are, you either make the shot or you don’t. This magically brings us to one of the most critical elements of Collective Impact - the feedback loop.

When designed well, the feedback loop don’t… err doesn’t lie either. One challenge folks often face with Collective Impact is that they get so bogged down in the individual elements of the feedback loop that they never actually get around to building one at all, much less one that doesn’t lie. Many initiative leaders call each element different things and use those words interchangeably so people are too confused to even start the process. In order to explain more clearly, I’m going to use the terms “large scale result”, “three-year outcome” and “leading indicator”.

Staying with the basketball example, let’s say our large scale result is for Coach K to supplant John Wooden as the best coach ever. After analyzing what we think will make a material impact on this large scale result, we assess that the key driver of people’s perceptions of John Wooden as a coach is the number of national championships he won during his tenure. Thus, we set as one of our three-year target outcomes “an average of one national championship every three years”. This is an audacious goal since NO ONE wins championships at that pace! However, all systems-change goals must, by nature be audacious (though not totally impossible).

Once everyone agrees that having that as a three-year outcome will help them reach their large scale result (even if everyone is absolutely terrified by it), the next step is to define a set of leading indicators. So, Duke sends a team of folks to carefully analyze all national championship winners and they found a statistically significant correlation in the following three areas:

Armed with this feedback loop that consists of the three-year outcome of winning an average of one championship every three years and the leading indicators that demonstrate whether or not Coach K and his staff are on the right track, you can imagine that Duke could come up with a series of different experiments to drive those indicators. They might spend more time on teamwork so that three players would always score regardless of who they are. They might switch their offensive strategy if they won three games in a row at an average of four points. They might throw out everything they’ve ever done if they lost two conference championships. Regardless of what they changed or experimented with, at the end of the season, they will have won the championship or not and it is that level of clarity that is required to achieve the systems level change we all seek.

Sadly, Duke has lost in the early rounds of the NCAA tournament for the last three years, so if my hypothetical scenario were real, they would have a lot of work to do.

It is much easier for systems change efforts to define what needs to change than get the stakeholders to actually change.

3. Peanut Butter and Jelly: Why Adaptive Leadership and Collective Impact are a Yummy Pair

Here’s a little secret: The hardest part about applying Collective Impact principles is NOT the technical stuff. While learning how to build feedback loops that “don’t lie” is daunting at first, once you get the hang of it, it’s more straightforward than it seems.

The real rub is getting people to change their behavior: It is much easier for systems change efforts to define what needs to change than get the stakeholders to actually change.

So what’s a Change Agent to do? Cross your fingers? Clap your hands and say you believe in fairies? Put your head down, do the work, and assume that it will sort itself out? Nope. The answer is adaptive leadership!

The goal is to wield your adaptive leadership superpowers to build a “systems change culture”. I wrote about that in an article a while back and the book ‘ Tribal Leadership’ does a great job of depicting what this type of culture will look like in practice. David Logan and his team describe five stages that naturally occur when bringing groups, or “tribes,” together to achieve a shared outcome. Those looking to support Collective Impact initiatives would do well by starting with cross-sector tables that are already in Stage three whenever possible. Stage three is characterized by the phrase, “I’m great, you’re not”. That might seem odd at first, but it makes a lot of sense when you think about it. Hopefully, you’re bringing high performing cross-sector stakeholders together who know that they’re good at what THEY do, but are still building a shared mental model with the others around the table. 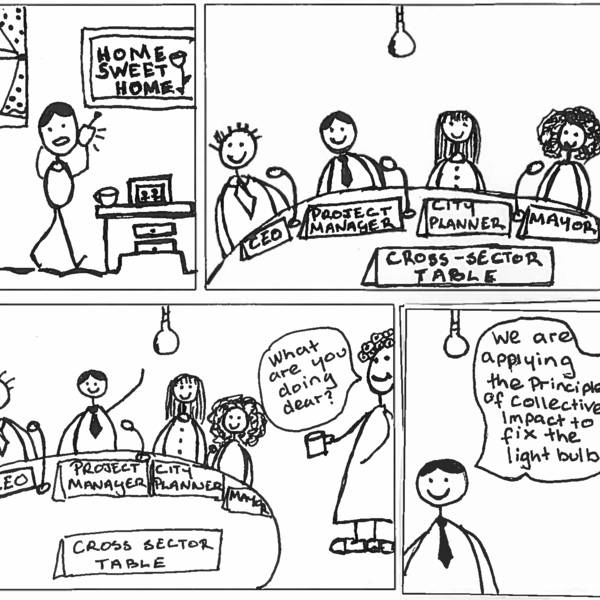 We have noticed lately that some social change practitioners are feeling pressured to apply “Collective Impact” given its popularity in the field. Since Collective Impact is one of many different too… 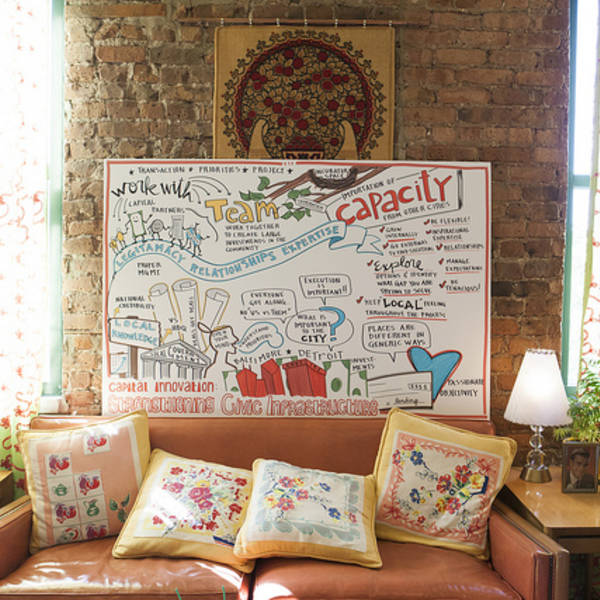 By addressing the conflicts that might threaten sow discord in many Collective Impact efforts and holding eight tensions in balance, bitterness ‘at the table’ can become a sweet recipe for catalyzing…

Once this starting place is established, then the focus can shift to moving the members of the cross-sector table from stage three to stage four. In the “We’re Great, You’re Not” stage, the “you” in that phrase is generally thought of as having a lowercase “y” (i.e. - another initiative, another city, another company). But over time, “you” should translate into the problem they’re trying to solve (cancer, income inequity, etc.). When the group is at stage four, they have such a sense of clarity and urgency about the big hairy audacious goal as the enemy that it is easier to navigate the adaptive leadership challenges inherent in this work.

Sound like nirvana? While ‘Tribal Leadership’ has some really good examples, another great book that shows what’s possible when you build stage four teams is ‘Switch: How to Change Things When Change Is Hard.’ I would highly recommend these to anyone grappling with the challenges of this complex work.

4. Putting It All Together

To recap, the principles of Collective Impact are:

The gap that many grapple with once they begin to do this work is in understanding how these steps actually drive systems change. Success would look like an explicit commitment by all participating stakeholders to change behavior. Through Living Cities’ work around capital innovation, we have seen promising early indicators that redirecting funding flows might be a good place to start.

But, we also know that in order to expand our understanding of how to apply the principles of Collective Impact to wicked problems, those working in this way will need to continue to build, measure, and learn so that we can pivot or swarm. Not sure what this means? This is what it looks like for Living Cities’ work:

If we do this, we will begin to collect the proof points we need to catalyze change and insist that it persists and thrives in the long term. Through this process, we will hopefully produce enough powerful evidence that earns us the right to enable others to shift policies, processes, and practices that will ensure lasting outcomes for generations to come.