Getting Back to Basics in Creating Jobs

Getting Back to Basics in Creating Jobs

This piece is the second in a series on job creation strategies to benefit low-income city residents. Click here to read the first blog.

Despite widespread agreement on the need to create more and better jobs, there’s very little agreement on how to actually go about that. That’s leading to a lot of wasted effort and resources. It may also be making conditions worse for low-income residents.

One example of wasted effort is that many communities are still preoccupied with attracting jobs from other places using various marketing strategies and incentive packages, even though, according to my research, attraction strategies only accounted for 1% of all net new jobs created in the US over the past decade. Partly in response, some communities have been focusing on growing their own businesses, which has mainly taken the form of launching new businesses. That’s made some difference, but not as much as you might think. Start-ups only accounted for around 7% of net new jobs in the past decade. 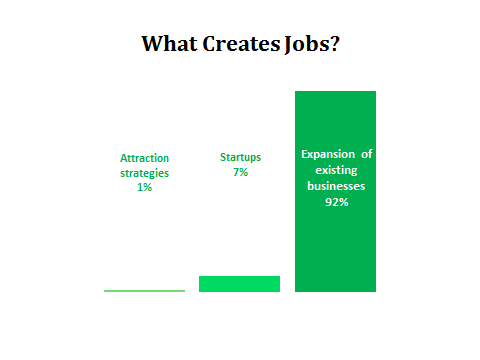 As it turns out, the vast majority of new jobs (92%) come from the expansion of existing businesses. But, ironically, that’s the area that gets the least funding and attention, and has the weakest infrastructure to support it. Public funding for local economic development organizations that are in the best position to support existing businesses has been cut by 40% since 2007. On top of that, most of the work economic developers do with existing businesses continues to focus on job retention, which has more to do with managing decline than promoting growth.

That creates a big dilemma for communities concerned about their economic vitality – the systems that currently have the most infrastructure and funding to support them have the least job creation potential . And those systems are proving very resistant to change because there are strong vested political and economic interests in maintaining them. A study by the New York Times found that state and local incentive packages are fueling an $80 billion a year industry. Meanwhile, the entire program budget for the federal Economic Development Administration last year was $221 million. 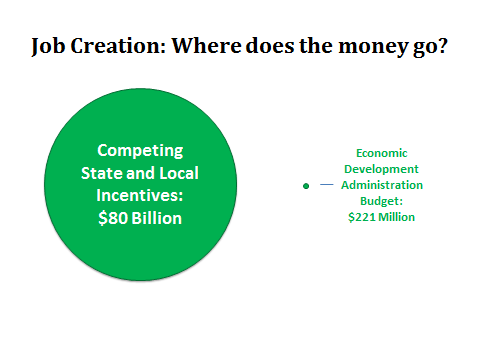 Another dilemma that communities face is that not all job growth is good for the community as a whole. Recent research shows that a rising regional tide does not lift all boats.

A recent study by the Fund for Our Economic Future looked at 115 metros to determine which factors were most closely associated with growth in jobs and income. They found that the metros that had the fastest growth between 1990 and 2011 also had the highest levels of inequality, poverty and crime. That suggests that the faster the growth, the more unequal the result. Similarly, there’s evidence that too much emphasis on creating high-wage jobs may make income inequality worse, with employment increasingly concentrated at the high and low ends of the job market. In addition, recent research by the Brookings Institution suggests that may also be true in regions that have targeted high-tech and knowledge-intensive industries, in contrast to regions where the focus has been on manufacturing, transportation, and logistics. 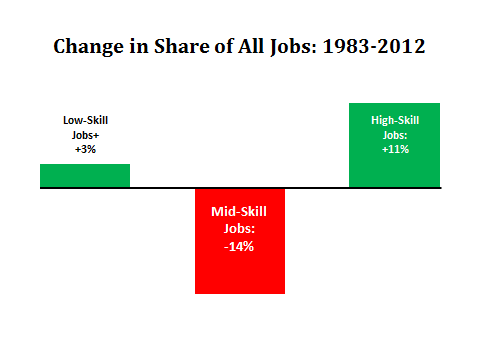 Local policy could be worsening the hollowing out of the job market. Data Source: Federal Reserve Bank of Kansas City

These findings suggest that cities can’t just focus on creating jobs and assume that the benefits will trickle down to everyone. Planners need to be intentional and strategic about making sure that low-income residents don’t get left behind.

What Should We Do?** One possible starting point**

Clearly, we need to start doing things differently if we want a different result. While it’s not clear yet what the answer is, research by the Institute for Exceptional Growth Companies points toward an intriguing possibility.

It suggests that most new jobs are being creating through the sustained, incremental expansion of relatively small existing businesses across a wide range of industries. Those businesses tend to be spread across rural areas, small towns, small cities and large urban areas alike, making it possible to spread the benefits of growth across an entire region. Moreover, those businesses comprise a broader range of occupations than those in high-tech or knowledge-intensive industries, making them a more likely source for middle skill jobs. And they include a disproportionate number of women and minority-owned businesses.

And even if that turns out not to be the answer, it’s not a bad place to start looking.

_Pete Carlson is the President of Regional Growth Strategies. _