A look into how City Halls across the county are approaching some of the key challenges facing our urban communities today. 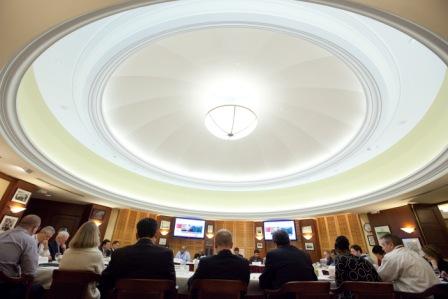 From January 26-28, we helped bring together leading mayoral chiefs of staff and policy directors from some of the largest U.S. cities for their seventh in-person meeting at Harvard’s Kennedy School as part of the Project on Municipal Innovation (PMI). The meeting offered a thought-provoking look into how City Halls across the county are approaching some of the key challenges facing our urban communities today.

1. Cities are facing immediate and significant “upstream” issues that will impact other issues that they are working on. The biggest themes that emerged from our discussion about the future of cities were:

2. Driving innovation amid the pressures of day-to-day operations is an important challenge for chiefs of staff. Former Pittsburgh Mayor Tom Murphy challenged the chiefs of staff to not merely “manage decline,” but to devote resources and energy to laying the groundwork for creating bright futures for their cities. McKinsey’s Lenny Mendonca suggested that meaningful innovation requires an external shock that convinces people that change is necessary; a change in how work is done to produce the innovation; and an incentive to scale that innovation. He suggested that the current fiscal environment has provided the necessary external shock, and that he is seeing increasing public sector interest in partnering with the private sector on the second piece – to help produce increased efficiencies. Achieving scale may be the hardest piece of the three.

3. Cities are convinced of the importance of working creatively at the regional level in an era of globalization and constrained resources. Harvard Professor Jack Donahue noted that there is a fundamental conflict between the regional basis on which economies are increasingly organized and the patchwork of local jurisdictions that define our governmental geography. Within that frame, there was agreement among the participants that large-scale regional governance agreements are in most cases unlikely, and so cities are focusing on more targeted agreements and arrangements with their neighboring jurisdictions. A number of cities also shared the belief that a strong central city is needed to drive effective regional partnerships, and there was interesting discussion of the challenges and opportunities of regional coordination across state (Kansas City, Kansas and Missouri) and even international (San Diego-Tijuana) borders.

4. At a time of constrained fiscal resources, cities are interested in exploring new pathways to financing city systems and services. Cities and presenters discussed a range of approaches here, including: incremental changes in budgeting processes to make them more rational and cost-effective; successful efforts in places like Oklahoma City to raise targeted revenue for dedicated purposes; experimentation with social impact bonds to finance innovations in human service delivery by monetizing projected savings; and exploring new models of public-private partnerships (e.g. privatizing the management of public assets or services without privatizing the assets themselves). At a time of considerable fiscal stress, the challenge remains to find approaches to current financing needs that are commensurate with the scale of the challenge at hand.

5. New civic technologies can help drive urban innovation, if skillfully used. Building on a session from the summer meeting of this group, the chiefs of staff discussed the opportunity to connect with urban technologists in productive ways. In particular, there is an opportunity for City Halls to help inform the work that technologists are doing to ensure that new applications and platforms more directly address core city concerns. The new technologies could then be used to help transform the delivery of products and services to city residents, as well as the ways in which citizens engage with their governments and each other.