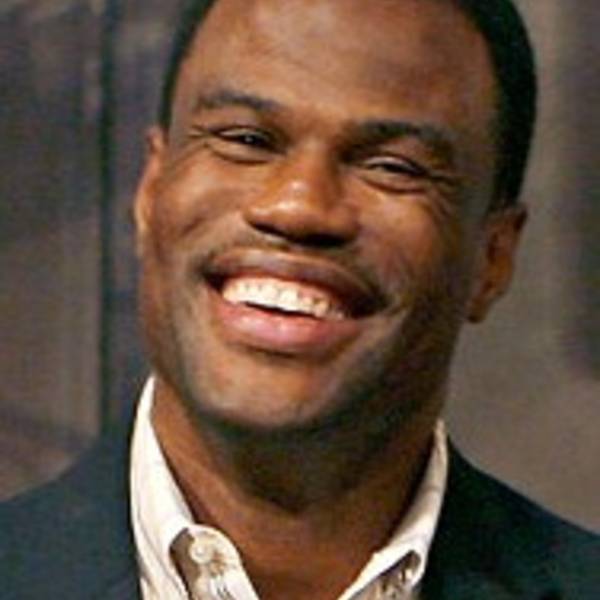 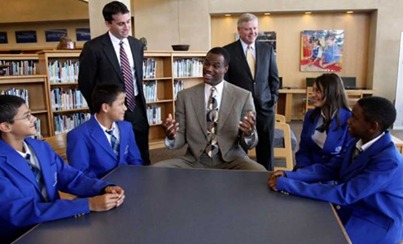 Last year, the Carver Academy which my wife and I founded 11 years ago re-opened its doors as IDEA Carver, a charter school in partnership with IDEA Public Schools. When people heard the news that I handed Carver over to a charter management organization, the first question they asked was, “How can you let your baby go?”

The irony is I didn’t see it that way.

Anyone who knows me knows that Carver has been an expression of my life and heart. I consider it a part of my legacy and a gift to the people of San Antonio who have supported me as a player and neighbor for over two decades. I founded Carver because I believe that all kids deserve an opportunity for success. Growing up in the Washington, D.C. area and going to school in Maryland allowed me to become well acquainted with many of the local high schools in the area. I partnered with the Police Athletic League and visited dozens of schools asking kids to stay away from drugs. It was particularly striking to me to realize the pressures that those kids felt on a daily basis and their need for a strong motivation and support group to do the right things in their lives.

When I got to San Antonio, further work with elementary and middle school children made me recognize that we are losing a great deal of talented kids through the cracks of our educational system. Even more than the education, I felt that we needed to help them to be able to make better moral decisions in regards to family and community. The best way to learn those things is through good examples. If we see good marriages and the fruits of them, we will be encouraged to follow suit. If we recognize the cost of the drug trade on our family, and we see the benefits of a life well lived, we will be more likely to emulate that behavior. All of the philanthropy that I had done up until then confirmed my belief that a superior education was essential to achieving that goal.

We decided to build a high performing school in an area of high need in the city of San Antonio committed to academic excellence, high expectations and strong values. My thought was that if we built a great school, people would support it and in the early stages, my celebrity would make starting the school easier. So I entered a partnership with the Carver Community Cultural Center, invested $5 million, and opened the doors of Carver Academy with 60 students.

From 2001 to 2011, we had grown to 120 kids in grades from pre-k to 6th grade and educated hundreds of students who have gone on to excel at some of the best secondary schools in Texas. On average, Carver students were performing 1-2 grades ahead in math, English and science. Our students were exposed to athletics, music, the arts, broadcast and foreign languages. Each day started with chapel in which the children prayed, studied our founding pillars, and worked on service projects. I was proud of the academic experience that we had created for our scholars, but despite my best efforts, we were still a small school with the capacity to graduate just 15 students per year.

I realized that I had taken Carver as far as I could. Despite outstanding academic outcomes and solid community support, I was concerned about sustainability and scale. I also realized that there was a larger role that I could be playing around education reform for students across my city, state and even the nation.

I found myself in a position that many first time philanthropists often do. I had a baby that I was very proud of that was stunted in its growth because of a lack of broad-based support. The project was viewed as ‘my project’ and not ‘ours.’ The yearly fundraising onus became a major challenge. In order to grow, we needed to do more for our families, impact more children, and try to provide a template that could inspire communities across the nation.

Once I realized that we had to do more, the next step was easy. I needed a partner. More specifically, I needed an organization that could use the investment that I made in Carver to reach far more children. One that was run by like-minded people who were as committed to excellent education as I was. I knew that when it came to the issue of expanding educational opportunities for all children - the more minds the better. We often forget that when we have a good idea, there are likely thousands of others who have already experimented with several iterations of it.

Enter IDEA Public Schools. From my first meeting with the IDEA team, it was clear that they were the right partner. They understood my vision, shared my values, and believed that our students were capable of accomplishing anything.

Since their founding in 2000, IDEA has educated over 15,000 students across 24 schools in the Rio Grande Valley region of Texas. Their students perform 1.7 years ahead of grade level, and 100% of their graduates have matriculated to college for six years in a row. A partnership with Carver allowed them to grow and open their first school in San Antonio. Together we have plans to grow IDEA’s footprint in San Antonio to 10,000 students in 20 schools; something that I could not have achieved on my own.

So, no, it is not hard to let Carver go. From my perspective, I am letting Carver grow – doing what’s best for the students that currently attend Carver and the students across the city of San Antonio that deserve access to a superior education. I am using my talents and influence to support a thoughtful and highly successful organization. I am excited about this partnership and eager to see the impact this shift will have on the educational landscape of my city. I will forever be grateful to the parents that entrusted us with the education of their children and to the students of Carver who brought so much joy and fulfillment to my life. Because of them I am even more committed to seeing the educational landscape change in our country and excited to take on a new role in this work.

David Robinson is a retired NBA basketball player, who played center for the San Antonio Spurs for his entire NBA career. He is the Founder of the Admiral Centerat Living Cities.

IDEA Public Schools is a growing network of tuition-free K-12 public charter schools serving more than 15,000 students in 30 schools throughout the Rio Grande Valley, Austin and San Antonio. IDEA is committed to \“College for All Children\” and has sent 100% of its graduates to college for six consecutive years. For more information on IDEA Public Schools please visit www.ideapublicschools.org.

David Robinson is a retired NBA basketball player, who played center for the San Antonio Spurs for his entire NBA career. He is the Founder of the Admiral Center at Living Cities.