Smart Subsidy in Community Development: An Interview with Jeremy Nowak

Smart Subsidy in Community Development: An Interview with Jeremy Nowak 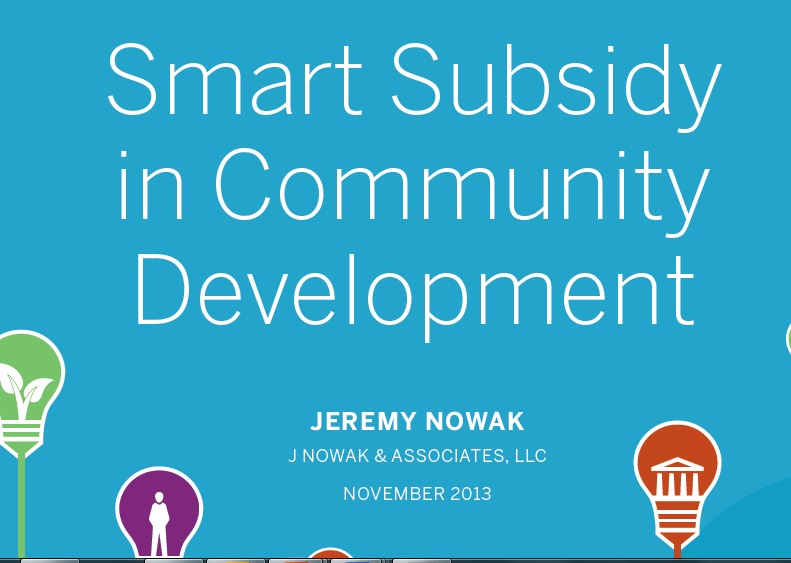 To effectively address the challenges that America’s cities are facing and improve the lives of low-income people, municipal governments need to modernize their operations, refashion their use of capital, and deepen their engagement in collaboration to achieve collective impact. In the realm of more innovative uses of capital, local governments need to create sustainable models for utilizing public resources – including redirecting resources to their most effective uses – and also use public sector resources to more effectively leverage private-sector and philanthropic resources.

As governments move to direct resources to their most effective uses, the concept of “smart subsidy,” articulated by Jeremy Nowak in his paper, Smart Subsidy in Community Development, provides a useful lens. Excerpts from a recent interview between Jeremy Nowak (President, J Nowak and Associates LLC, former president of William Penn Foundation and founder, President and CEO of The Reinvestment Fund Inc.) and Arthur Burris (Director of Public Sector Innovation at Living Cities) are provided below.

AB: Broadly speaking, what is the concept of smart subsidy?

JN: Subsidy is the provision of government resources to advance public purposes. Smart subsidy means using scarce subsidy in ways that create the highest amount of impact for the dollar. If the provision of subsidy in various parts of the budget is not oriented toward cost efficiency and high impact, then the subsidies won’t be smart. And we too often don’t have systems and incentives in place to encourage smarter use of subsidy. In the absence of smart subsidy, community development efforts fall short of their potential and will not produce needed results for low-income people.

AB: In addition to the overall scarcity of government resources, why should the concept of smart subsidy be particularly resonant for the public sector at this time?

JN: From an economic competitiveness standpoint, over time there will be places where government has understood the importance of this kind of new behavior and those will be the winning places, and there will be places that have been unable to break through decades of the old way of working and these places will not do as well. Governments have to be quarterbacking in a smart, distributed way and this will be the distinction point between winners and losers.

AB: Who in local government would you consider to be the most important audiences for the concept of smart subsidy?

JN: This work is relevant to individuals across the public sector. At the executive level, mayors, governors, and county executives have a stake in smarter subsidies. The concept of smart subsidy can also help legislators see the implications of their legislation within the context of the relative competitiveness of their jurisdiction. And the work also has important application for the work of bureaucrats, especially in agencies that handle community development block grants, aggregation and distribution of land, and housing finance – essentially anyone that deals with building, land, and low-income housing. The work could also be extended to other things like workforce development, but this paper doesn’t reach that far.

AB: If public sector leaders at the municipal level in a place wanted to take the initial steps forward in adopting this approach, what, concretely, are the first set of things they would need to do?

JN: The first step is to understand the nature of how subsidies are working now, and to conduct in-depth analytical work on what the costs are of the current way of working and which costs could be trimmed. Where possible, it would be helpful to get a comparative framework from others doing this work (e.g., other governments). These steps would then set the stage for figuring out how to move, within existing constraints, toward a more effective, efficient system.

AB: What is the importance of data in the theory and practice of smart subsidy?

JN: Cities do have relevant information (more in some places than others) but do not have the ability to systematically put the information together in a comparative framework and analyze it. Most systems are siloed and some cities are still working on paper. This means that there is, in many places, a limited ability for cities to say: “what are we spending on this problem, what’s the productivity of that spending, and what could it be?” Open data and increased transparency around data can also allow city residents to be a force pushing for smarter use of subsidies.

The concept of smart subsidy is one lever for achieving more effective use of public resources. As practitioners become acquainted with the concept, we are eager to share learnings as part of our work towards greater municipal innovation.