We are launching an experiment to help us learn what it takes for technology to help deepen engagement between local governments and low-income people. 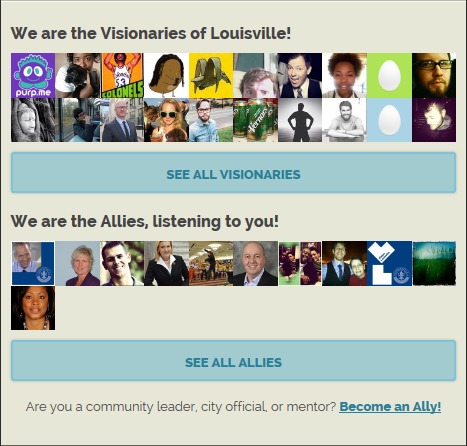 This week, we are launching an experiment to help us learn what it takes for technology to help deepen engagement between local governments and low-income people. It’s called #VizLou.

#VizLou is a mobile website developed for use in Louisville, Kentucky, the host city for this experiment, as part of a planning process called Vision Louisville. The site prompts young adults (“Visionaries”) to share bold, long-term ideas for the future of Louisville, and connects these users with civic leaders (“Allies”) including Mayor Greg Fischer, his enior staff, and leaders from local nonprofits. Ideas posted to the site automatically repost to Twitter, and ideas Tweeted with the hashtag #VizLou are pulled into the site. Ideas on the site will be reviewed by leaders of seven “focus teams” of civic leaders charged with making recommendations for the Mayor on specific topics (e.g., health, economy). Civic software developer OpenPlans is developing the site in partnership with, and with support from, Living Cities and three of its members: the John S. and James L. Knight Foundation, the John D. and Catherine T. MacArthur Foundation, and MetLife Foundation. This new tool has been embraced by Mayor Fischer and his senior staff, and already is seeing early use by young adults, Metro staff and community leaders. #VizLou has been informed by engagement with local government leaders, community leaders and young adults living in low-income communities in Louisville. We continue to refine the tool in response to our learnings from Beta testing. A critical partner in this ork has been our Urban Policy Advisory Group, a network of mayoral chiefs-of-staff and policy directors from major American cities, which we co-convene with Harvard Ash Center. We are working with additional cities interested in adapting this tool.

We think #VizLou can be a valuable channel to encourage and capture dialogue between low-income city residents and local governments; we also have believed throughout this process that no technology tool alone is sufficient to create the robust engagement we want. Accordingly, we have sought to use this work to learn about what local governments and their partners need to do differently in order for this work to have its fullest effect. You may have already seen writings on this subject on our blog, _The Catalyst. _Expect to see more in the coming days. More broadly, this work is influencing our emergent organizational thinking about the connections between data, technology and public sector innovation. Despite all the resources being spent trying to tackle big challenges such as education, jobs, health, and housing in cities, we are failing to achieve the desired results, at the needed scale. The public sector, with its unique combination of resources, authority and influence, has a unique role to play in making cities places of opportunity. Yet, the systems to which we have traditionally looked to help create opportunity have not kept pace as our cities have been transformed by forces like the internet and globalization.

Through Living Cities' investments, such as our five-city Integration Initiative and our support for the 80+ city Strive Network, local leaders are putting aside self-interests and collaborating to re-engineer interconnected-but-broken approaches to education, transportation and jobs. Meanwhile, smart cities technologies, open data, predictive analytics and apps for civic engagement have proliferated recently, giving cities new and powerful tools to solve tough problems. We are exploring the promise of marrying the emerging civic technology and data movement with these leading systems-change initiatives to bring about faster, deeper and broader results.

We have been engaged in productive dialogue with leaders in data, technology, and systems change work about how best to advance this agenda, and look forward to connecting with others interested in this work.