Cities around the country are working to reimagine what should be done with underinvested neighborhoods and find new ways to connect low-income people to economic opportunities wherever they exist in a region. Living Cities is working with leaders in cities to drive efforts that simultaneously tackle issues of people, place, and opportunity, including through our Integration Initiative.

On October 4-6, teams from Baltimore, Cleveland, Detroit, Newark and the Twin Cities gathered in Washington, DC for the third Integration Initiative Learning Community. Forty leaders who work in philanthropy, nonprofits, government and economic development engaged in learning with peers as well as relevant experts. At past Learning Communities, speakers provided insight on topics ranging from adaptive leadership to message framing to the smart use of financial subsidies (you can read the highlights from the first and second gatherings). 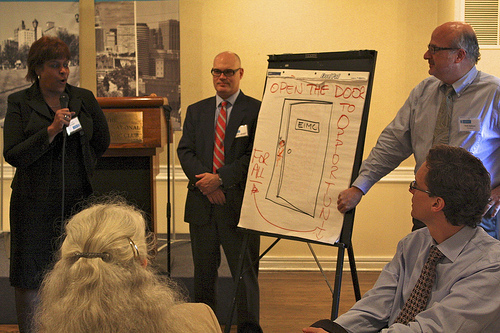 Ten months into The Integration Initiative, this third Learning Community built on the lessons from the past sessions and delved into three topics: 1) linking the sites’ strategies focused on connecting low-income people to opportunity to their regions’ economic development ecosystems; 2) exploring how agencies in the Federal Government are supporting integrative work; and 3) using data as a tool for strategic decision-making. The agenda yielded rich insights from speakers and participants alike, and surfaced challenging questions for discussion:

Join conversations with The Integration Initiative on Twitter by following us at @TII_LC, and using the hashtag #TIILC.

Share your feedback on the Learning Community Highlights by emailing agold@livingcities.org.