On Tuesday, September 27, 2011 Living Cities marked its 20th anniversary by bringing together leaders from the public, private & philanthropic sectors and challenging them to think differently about collaboration, innovation & urban social change. 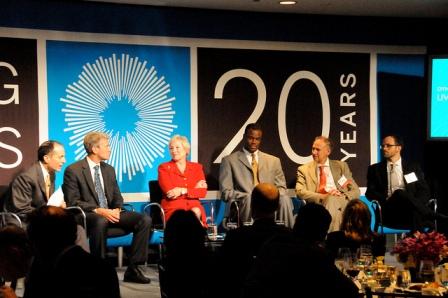 On Tuesday, September 27, 2011 Living Cities marked its 20th anniversary by bringing together leaders from the public, private & philanthropic sectors and challenging them to think differently about collaboration, innovation & urban social change. What follows are five of the most intriguing ideas articulated by speakers and attendees who included foundation heads, bankers, mayors, professors, non-profit leaders and even an NBA-hall of famer. As cities continue to grapple with a changing economic and social landscape, we believe these five ideas and the questions they raise will be important to consider as we work to improve the next 20 years of metropolitan prosperity and opportunity. Please share your own thoughts with us on Twitter using the hashtag #Next20.

1. CITIES MUST CAPITALIZE ON THEIR UNIQUE ATTRIBUTES TO SERVE AS ENGINES OF INNOVATION

“Cities really have these two fantastic assets for innovation- density & diversity,” _noted Steven Johnson, the author of Where Good Ideas Come From. He went on to explain that because cities foster a fluid and public exchange of ideas and a place of convergence for people working on different kinds of problems, they create enormous potential for innovation. As a result of the abundance and proximity of thought, cities can support “liquid networks” which help cultivate fresh, new ideas through greater “information spillover.” Johnson likens cities to the web noting that they are both “open, stacked platforms that accelerate innovation,” by providing the opportunity for individuals to experiment and build right on top of what already exists. For instance, the world wide web helped generate the internet which gave rise to social networking sites like Facebook, and from this a new market for application development. Similarly, cities are open platforms of people, systems, infrastructure and resources that spark ideas and innovations that can transform the social, economic, political, environmental and cultural fabric. As Mayor R.T. Rybak of Minneapolis urged attendees to remember, “The asset base we have in our cities is huge – our silk road will be built out of the population.”

_ “The biggest challenge for us will be scale and replicability – with increased pressure on every source of funding in every community across the country, more pure dollars aren’t going to solve it,” _asserted Audrey Choi Head of Environment, Social Finance, and Community Reinvestment Group at Morgan Stanley. Choi went on to point out that one of the significant challenges that the Living Cities Integration Initiative has revealed is the challenge of deploying capital.

The conventional wisdom has always been that low-income communities do not have access to a suitable supply of capital. However, Choi noted that through The Integration Initiative, “a whole phalanx of financial institutions lined up wanting to deploy capital…[The] scarcity of capital is not the issue, it’s the scarcity of expertise at [the] community level.” The Initiative has revealed that the conventional wisdom is wrong. The capital challenge faced by low-income communities is not one of supply, but is due to both a lack of demand and of capacity to connect capital to demand. Living Cities will be working with other stakeholders to understand which capacities, institutions and policies make up strong capital absorption ecosystems, in order to learn from them and improve the flow of capital into low-income communities across the country.

“For many years collaboration was a luxury, now it’s a necessity ,” remarked Gary Hattem President of The Deutsche Bank America’s foundation over an evening panel to discuss cities and the future. His comments reflected a major theme from the day and an acute awareness that this difficult economic climate will require greater partnerships and alignment than ever before. As Andrew Plepler, Global Corporate Social Responsibility and Consumer Policy Executive at Bank of America, noted, “Our collective health is critical to the future of the economy and we need to figure out how we can come together to see ourselves as part of a collective agenda.” Leaders from across the spectrum agreed that we can no longer afford to see ourselves as distinct actors working on one part of the problem in isolation, and that by collaborating and bringing to bear our collective expertise, capacity and resources we can advance a common agenda that will be in everyone’s self-interest. This new form of more dynamic collaboration will be essential to advancing social progress and will continue to inform how Living Cities can better engage new partners from the public, nonprofit and private sectors.

4. THE NEXT GENERATION OF INNOVATION WILL REQUIRE A ‘ONE-TABLE APPROACH’

_“With the big table you hit a different plane of communication. Because the interaction and speed of connection is faster and more routine, you can build rapport and relationships which allow you to take on more difficult objectives than you could alone,” _ Don Hinkle-Brown, President and CEO of The Reinvestment Fund (TRF) explained during a panel on the Living Cities Integration Initiative. This one table approach for problem solving and decision-making brings together civic leaders from across sectors to work together to understand, problem solve and tackle complex problems together. Don Hinkle-Brown and others from each of the five Initiative sites – Baltimore, Cleveland, Detroit, Newark, and Minneapolis-Saint Paul – agreed that the one table is a powerful tool. From increased levels of trust to the development of a shared language and understanding to an amplified voice and reach, the table helps leaders form the necessary connections to accelerate transformational change. As Monique Baptiste, Project Director of Newark’s Strong Healthy Communities Initiative explained, “By convening this table we are bringing innovation and investments together in one place,” creating a new kind of civic infrastructure to transform cities and the lives of the people who live in them.

“There is no way the Detroit of the future, looks like the Detroit of the past” stated Rip Rapson, President & CEO of the Kresge Foundation adding that, “We need to re-conceptualize what the new normal is, and it may not be what we have built and come to understand.” As the country continues to work its way toward an economic recovery, we cannot rebuild on outdated assumptions or models. New paradigms of social change that support integration and collaboration will mean that we find new ways of working together and new systems to undergird this work. Looking ahead, Diane Bell-McKoy, President & CEO of the Associated Black Charities offered an interesting thought, “We will find that some structures and some of the players won’t be there anymore… as we move toward integration, sometimes what we’ve created have been auxiliary structures and answers to systems not working. We will learn that if we really are true about pathway and vision we won’t have some of these.” If we give local leaders space to innovate and propose bold approaches that cut across traditional silos, what we find may be tremendously different than what we have in place now. Systems that no longer meet the needs of the people they were designed for must be reimagined, rebuilt, and sometimes even removed.