In The Works: Structuring Cross-Sector Partnerships To Achieve Impact

In The Works: Structuring Cross-Sector Partnerships To Achieve Impact

From the White House to the Harvard Business Review, cross-sector partnership is a term that is used to describe a wide array of activities ranging from events and one-time projects, to government-appointed commissions and ongoing programs, as well as alliances of stakeholders working in new ways to address complex social and economic challenges.

However, cross-sector partnership seems an insufficient term to capture all the
variation that the term covers. An important step for being able to build the best partnerships to achieve our intended goals is to actually have some way to talk about all the variation within partnerships.

Before I joined the team at Living Cities in May 2011, I’d spent much of my career working to foster relationships with leaders in nonprofits, government, labor and business in order to drive the economic growth of regional economies. Some of these cross-sector collaborations yielded results, while some lost momentum, or just
never seemed to be set up in the right way to achieve their goals. When I joined Living Cities, I was excited to try something new, and to take on a role where instead of building cross-sector partnerships, I would get to learn from and share the insights and ideas coming out of the work that we fund, particularly with The Integration Initiative,
which is built around the “one table” approach. The “one table” requires a leadership table made up of decision-makers from a range of institutions that are committed to changing how they work in order to achieve better results. At its root, the “one table” approach is about building and sustaining a resilient cross-sector partnership.

Through interviews with practitioners and reading, I soon learned that while there is a rich number of case studies and papers about cross-sector partnerships working on specific issues or projects, and an emerging body ofwork on backbone organizations and collective impact, unlike in the private sector, there is a very limited amount of work about the structures and behaviors of partnerships that enable them to achieve their goals. My colleagues and I recognized that this could be a powerful tool for helping practitioners and funders structure (or restructure) cross-sector partnerships so that they are best positioned to achieve population-level results. At Living Cities we are in the midst of developing this work, and are excited to preview a couple of ideas.

After lots of thinking and debating, we adapted the taxonomy concept from science in order to strengthen the practice of identifying, naming, and classifying cross-sector
partnerships.

To give you a sense of how the taxonomy works, here are two traits that we’ve developed: 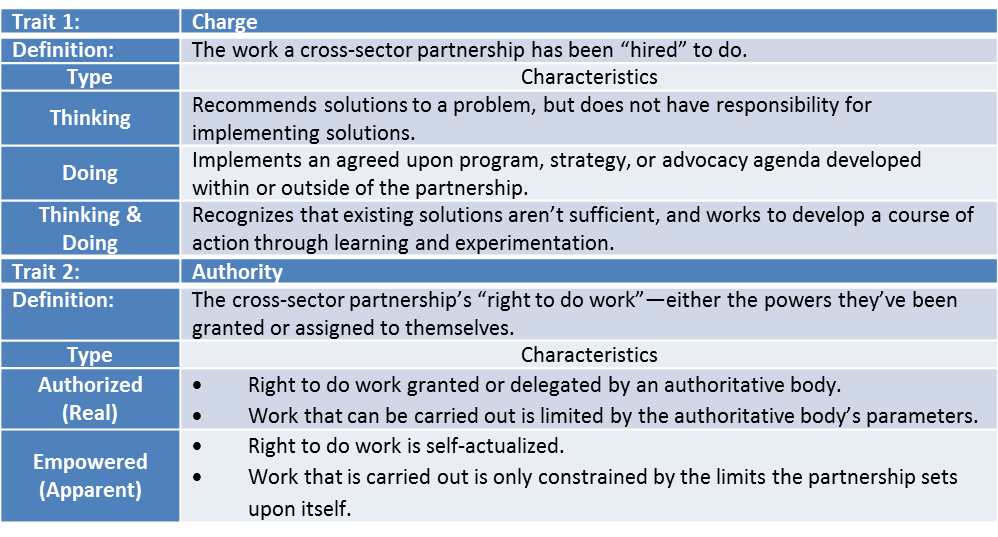 If you’re anything like me, when you read these, you immediately started to apply the traits to a partnership that you’ve been involved with. These two traits can be particularly revealing when looked at together. For instance, I worked on a partnership that was focused on growing the health care workforce in a region. We definitely had a \“thinking & doing\” charge, but our authority was delegated by another organization—the local chamber of commerce who had identified the issue and invited the stakeholders to come together. Part of why that partnership ended up petering out was because the chamber which had granted the partnership the right to do the work decided that the
health care workforce efforts were no longer a priority, and the members of the
partnership did not feel empowered to carry it on their own.

It’s important to be clear that naming and classifying are not the same as ranking. The taxonomy that we’re developing aims to provide practitioners and funders with a language to reflect on cross-sector partnership’s component traits and if those traits fit together in a way that will enable the partnership to achieve its goals. It is not saying there is one right or better way to structure a partnership because we recognize that an effective partnership can also be made up of a quirky set of traits, as long as there is
awareness of the “quirkiness.”

In nature there are some species that don’t fit neatly into a defined taxonomical grouping but still thrive. My favorite example of this is the duckbill platypus, which is a mammal (warm-blooded, breathes air, covered in hair/fur) that lays eggs. The fact that the duckbill platypus lays eggs doesn’t make it better or worse than other mammals. But having the awareness of a trait that isn’t the norm is important for biologists who study them. Similarly, it is valuable to be aware of traits in your cross-sector partnership that are quirky if you want to achieve your intended goals.

In the coming months, we’ll be release the cross-sector partnership taxonomy which will include 14 traits—9 of which are focused on structural elements, and 5 of which are focused on partnership behaviors. It will also include a set of four case studies—where the taxonomy has been used as a framework for telling the story of cross-sector partnerships demonstrating impact on a range of complex social and economic challenges in different parts of the US.

But I’d love to hear from you. Are there traits of cross-sector partnerships that you’ve been involved with that have helped make them successful? Doomed them to failure? Share your stories, questions and feedback in the comments, tweeting @Living_Cities
(with #xsector) or by emailing me at agold@livingcities.org.