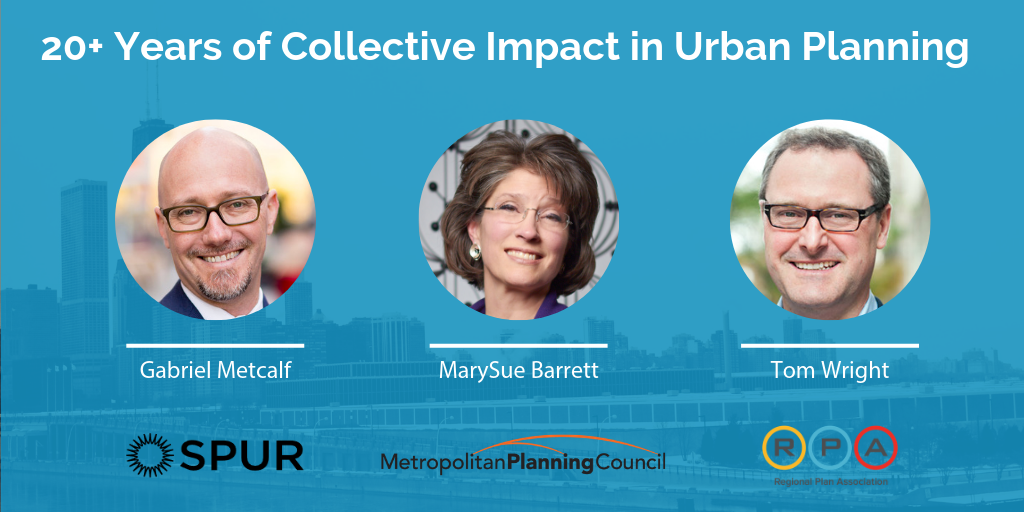 The New York region, San Francisco Bay area and metropolitan Chicago are magnets for technology and innovation, creative young talent, and global investment. The buzz around New York’s High Line, San Francisco’s new five-acre rooftop Salesforce Park, and Chicago’s Riverwalk paint pictures of vibrant, dynamic cities where unemployment is down and many are succeeding. But the story is starkly different for many regional residents who are disconnected from the dynamic parts of the economy, face crushing cost of living burdens and are falling further behind. Despite a resurgence in the urban centers of many U.S. cities, persistent and growing income and wealth gaps lay bare our collective failure to properly share prosperity.

Each of the three of us have helped steer our respective regions’ leading independent urban planning organization for more than 20 years. We understand the power of bold ideas, major public investments, compelling data, and strong and diverse partnerships. When Chicago’s government and business and civic leaders decided to transform railroad tracks in the middle of the Loop into Millennium Park in the early 2000s, few predicted the ripple effect on nearby real estate values or the civic pride that this cultural gathering spot would spark. When the dot com bust led to hundreds of thousands leaving the Bay Area for more promising regions, few predicted that a second tech boom (since ~2010) would be even larger, fueling a major shift in employment to the transit-rich core of San Francisco. And in the aftermath of 9/11 and then the Great Recession, even as the Big Apple pulled together to rebuild Lower Manhattan and diversify its economy, few predicted that New York City would add 750,000 jobs in less than a decade.

So why are so many people being left behind? The reasons all stem from structural racism, unequal investment, and a passive tolerance of the status quo. Despite having raised its minimum wage, required employers to provide paid sick leave and other local labor policies, San Francisco’s housing costs are the highest in the nation and the income gap is starkly racialized: African American households in San Francisco earn less than $30,000 annually while the average white household earns over $110,000. Chicagoans cringed when confronted with the true cost of segregation: $4 billion in lost African American income annually, 83,000 fewer bachelor’s degrees, 30% more homicides. New York City’s unequal property tax system burdens homeowners in communities of color neighborhoods with tax bills that are up to four times the rate of those in predominantly white communities.

The data from comprehensive regional plans on growing inequality are similarly damning. Metropolitan Chicago stands alone among the 10 largest metros in losing population between 2016 and 2017. The Chicago Metropolitan Agency for Planning’s new ON TO 2050 Plan highlights that population gains since 2006 have been almost exclusively among high earners. When you consider that low- and middle-income families now must spend 67% to cover the basics of housing and transportation in Chicagoland, the loss of 60,000 African Americans from the city sadly starts to make sense.

The Regional Plan Association spent the last five years preparing its Fourth Regional Plan, unpacking regional economic and demographic trends and identifying challenges to future prosperity. Over the past generation, the average cost of renting an apartment in New York City has gone from just over one-quarter to almost one-third of household income, severe overcrowding of rental apartments has doubled, and the number of people experiencing homelessness has tripled. Homeownership, which was once widely accessible to the middle-class, is now completely out of reach to two-thirds of families in the region.

Inspired in part by the work of the RPA, SPUR has launched a Regional Strategy for the Bay Area – to develop a comprehensive vision for solving the most urgent problems faced by the Bay Area, and a road map for making that vision real. SPUR’s early scenario planning warned Bay Area residents that current trends point towards a “Gated Utopia” future where only the wealthy benefit from the region’s strong economy and quality of life.    All three regions have seen a tsunami of suburbanizing poverty. Between 2010 and 2016, suburban Chicago residents living below the poverty line increased by 270,000 people, representing a 54% increase. In New York, while the city grew economically since 2009, actual median incomes declined in every one of New York’s suburban counties. And the Bay Area and portions of adjacent San Joaquin Valley were the epicenter of the country’s foreclosure crisis, with Stockton among the largest cities in U.S. history to declare bankruptcy. Growth in suburban poverty coupled with long commutes, limited nearby employment and diminished public services has cut off hundreds of thousands of residents from the booming economy. Caught in a death spiral, many suburbs are too small in scale to deliver quality services and too fiscally stressed to compete economically.

What we often hear back from those we work with in city and suburban governments is a plaintive plea to emphasize strengths, like Chicago’s impressive gains in the number of residents over 25 with college degrees, now the highest of the top U.S. cities. San Francisco is similarly proud of nearly 55% of its residents having a college degree. New York City has added 178,000 people with graduate degrees in just five years, fueled in part by a rapidly growing tech sector.

Yes, we should celebrate strengths, and then must harness them to solve pervasive problems. Problems such as utilizing the 15,000 vacant parcels in Chicago or fixing New York’s aging subways and commuter rail networks. But we can’t afford to be blind boosters, bragging about rising incomes and ignoring deepening poverty, pretending that we can solve deep racial disparities with race-neutral policies.

What holds cities back from attaining their potential as places where a person can move up the economic ladder and where social cohesion can take root? Harvard’s Raj Chetty and Nathaniel Hendren have documented the lifelong income gaps that result from the “punishing reach of racism” for black boys, whose experiences are dramatically different than white boys and even black girls. Too often, black communities have faced utter neglect or exploitative investment that leaves individuals and families strapped for resources or displaced altogether.

The shared benefits of upending this reality come to life in the story of Skyler Dees, a resident of North Lawndale on Chicago’s West side whose lifelong dream was to be a chef or caterer. His breakthrough came in 2017 when Skyler was among the first recipients of a grant through the City of Chicago’s groundbreaking commitment to linked development. The Neighborhood Opportunity Fund, capitalized by fees on developers of buildings in the central area, is a dramatic example of an on-ramp to prosperity. It has generated $47.8 million in its first 18 months and has secured commitments totaling $203 million and growing. “I want to break down that stigma that black people don’t want to eat healthy,” said the founder of Skyler Dees Catering Company. He’s doing that, and much more.

Will our voices, joined with others, amplify the message that, across race and class we’re interdependent, that reducing inequality for some ripples through the economy and benefits us all? This will only happen if every institution — governments, foundations, businesses, and yes, our own — adopt a racial equity framework that sets clear targets for change. Solid research, inspiring stories, and our combined six decades of experience have convinced us that we must tackle rising inequality with courage, to ensure that no one falls behind.