Food for Thought (and Opportunity)

Food for Thought (and Opportunity)

While some Americans celebrate Thanksgiving with feasts of turkey, stuffing and pumpkin pie, it’s important to acknowledge than many low-income Americans have limited access to food and food security this holiday season. As Thanksgiving approaches, we’re looking back at some of Living Cities past work on our food system as a lever for economic opportunity. This post originally appeared on July 26, 2012.

Businesses that make up the food system employ nearly 20 million Americans across the segments of food production, processing, distribution, retail and service. Despite accounting for one sixth of the nation’s workforce, the food system consistently offers low wages, few benefits and harsh conditions to it workers. Recognizing the scaled opportunity for impact within the food system, Living Cities is exploring the potential of our large and growing food industry to create quality jobs for low-income Americans in cities.

While most of the work to date around food and low-income communities has taken a health-centered approach – such as access to fresh, affordable food – we are expanding our focus to look more broadly at how we can transform the entire food system to increase economic opportunity for millions of Americans. As part of this work, Living Cities recently commissioned the Food Labor Research Center at UC Berkeley to conduct preliminary research into the quality of jobs and career pathways in different segments of the food system. 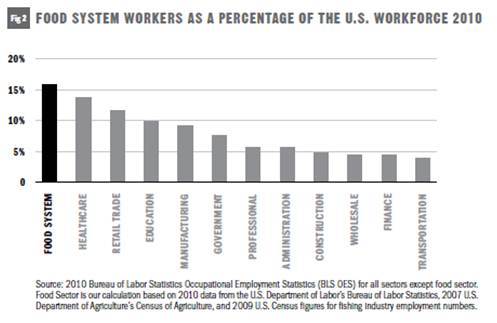 As a result of this study, we learned that the problem in the food system include both poor wages & underemployment.

Only 13.5% of workers in the food system earn a livable wage. In particular, 70.3% of grocery workers and 50.9% of warehouse workers receive poverty or subminimum wages. More specifically, the median hourly wage was $9.11 for food service, $9.69 for food retail, and $13.28 for distribution workers. But low wages are just one of the issues facing these workers.

Living Cities is engaging with Jeff and UpLift Solutions to learn more about the mechanics of his business model and the value in creating career pathways for local low-income residents.

Many workers face the challenge of part-time work and almost half of grocery store workers reported working part-time hours either some or all of the time, with schedules that rarely followed a five-days-on, two-days-off pattern. As a result, many of these workers do not qualify for employee-sponsored health insurance programs. In fact, of all the grocery store workers surveyed, only 15% had health insurance through their employer and only 21% received paid sick days. Jobs in other segments of the food system have different issues: tipped food service jobs receive very low wages and warehouse jobs suffer from high levels of temporary employment and significant incidences of wage theft.

Philanthropy’s interest in food has largely centered on health issues and access to fresh food. As interest in addressing urban food deserts gains momentum, we need to also recognize the economic impact of the food system on low-income communities. More specifically, we need to realize the potential of food system businesses to create quality jobs for low-income people. To that end, Living Cities will be highlighting models of food businesses that embed quality jobs and career pathways into their operations. We plan to share the lessons learned from this work through reports, sets of recommendations, webinars, and other knowledge sharing activities.

For more information on the quality of jobs throughout the food system, see the report “The Hands that Feed Us.”

This blog had previously and incorrectly listed Carmen Rojas as its author. The byline was updated on November 25, 2014.