Bright Spots in a Darkened Landscape

Bright Spots in a Darkened Landscape

By partnering with universities to leverage data and technology, cities continue to emerge as bright spots of innovation. They're leading the way in tackling today's most intractable problems.

279 mayors across the United States have committed their cities to meeting climate change goals set out in the Paris Agreement, despite the Trump administration’s decision to withdraw from the accord. 200 cities recently expressed interest in being certified by What Works Cities in the use of data and evidence to increase government effectiveness. 400 local government leaders from 90 cities met recently at a summit on performance and innovation to share promising practices in seven key areas required for a city to be high performing and ‘Equipt to Innovate’.

What do these three things have in common? They represent the bright spot in America today: our cities. Dysfunction in Washington has heightened awareness of the functionality of urban centers, but the reality is that cities have been coming together in new and extraordinary ways to innovate, solve seemingly intractable problems and help those solutions spread across the country for more than a decade.

Particularly promising is the innovation happening at the intersection of cities, universities, data and technology. I first saw this in 2012 when I was introduced to the groundbreaking work being done by the City of Chicago and the University of Chicago. Together, they were trying to harness the momentum around Big Data for the benefit of Chicago residents by intentionally mixing 20th century social science with 21st century computer science. Then-Chicago Chief Data Officer Brett Goldstein called it bringing machine learning and tabular data together.

Those city-university partnerships have come a long way since then. Today, there are 35 regional city/university partnerships focused on research, development, and deployment (RD&D) projects under the umbrella of the MetroLab Network. These projects offer solutions rooted in technology and analytics to help cities meet challenges from inequality in income, health, and opportunity; to aging infrastructure; environmental sustainability and resiliency. The Network’s Advisory Board (of which I’m a member) is chaired by former Maryland Governor Martin O’Malley, whose pioneering CitiStat program used data to improve city performance when he was mayor of Baltimore.

My organization, Living Cities, works with hundreds of local leaders in cities across the country who are committed to creating a New Urban Practice that disrupts old ways of working, redirects existing resources towards approaches that work and delivers dramatically better results for low income Americans, especially people of color. Unfortunately, these leaders’ commitment to transformational change far exceeds the number of tools available to help them succeed at this difficult work.

That’s where the promise of the MetroLab Network lies. In January 2017, MetroLab convened a group of researchers, public leaders and philanthropists to tackle a $1 trillion question: how do we make sure that the substantial financial, health and childcare supports that we make available annually for the country’s most vulnerable residents actually helps them? While the private sector has developed sophisticated geospatial tools to identify underserved customers and prime locations for new facilities, public leaders still mostly rely on broad historical trends and intuition to shift resources to communities where they are most needed. Given the housing and financial instability of lower-income households and their steady migration from the inner city into the suburbs, trends and intuition alone are likely to result in public services belatedly chasing poverty rather than anticipating it.

A promising example from this event was the bringing together of a team of researchers at the University of Chicago, its Center for Spatial Data Science, and Chapin Hall, who are now developing an analytic framework and tool, Human Services 360, to allow local leaders to use data and technology to ask and answer the following questions: 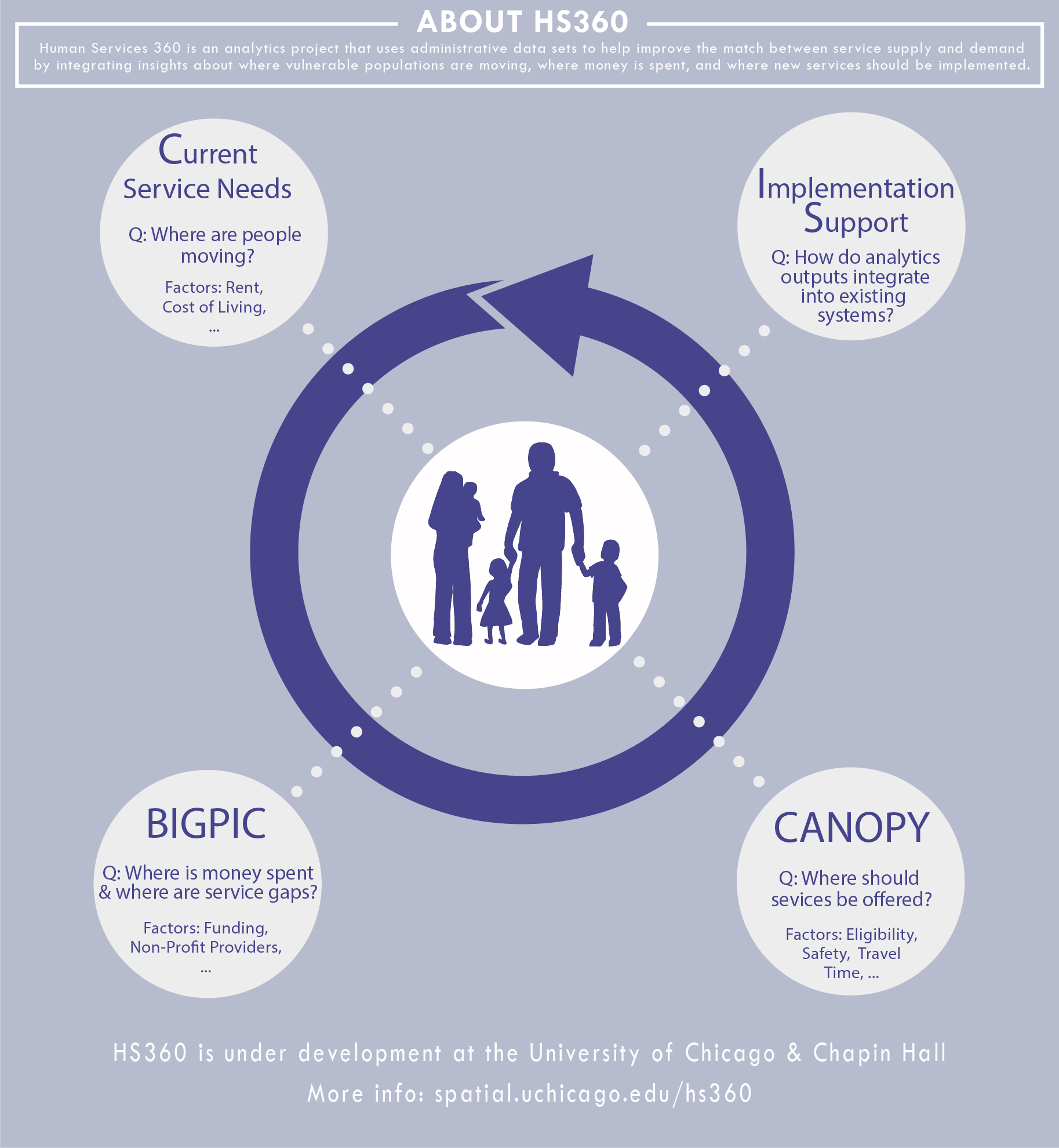 The first prototype for Human Services 360 uses data from several sources in Chicago and New York City and State. A second phase of the project will make the underlying methodology and tools available to the full MetroLab Network. Human Services 360 is just one example of more than 140 research, development and deployment projects underway across the network.

Importantly, the teams behind these projects aim to overcome a big problem with many technology initiatives in the past: the availability of the technical expertise needed for successful implementation. Building on efforts by organizations such as Code for America, who have stimulated demand for public service by technically savvy individuals, projects like Human Services 360 are tapping a new breed of university-based faculty, students, and researchers eager to bring their knowledge, expertise, and creativity to the unique challenges facing local governments.

The combination of high performing cities and local universities who are committed to their success could not be more promising. The ability of the MetroLab Network to encourage the spread and adoption of the best ideas from these partnerships across the nation really could be a game changer. I’m greatly appreciating these rays of hope among the darkness surrounding so much of the American landscape.

You can find more information about the Human Services 360 project at spatial.uchicago.edu/hs360.