What Would Carlos Slim Do?

What Would Carlos Slim Do? 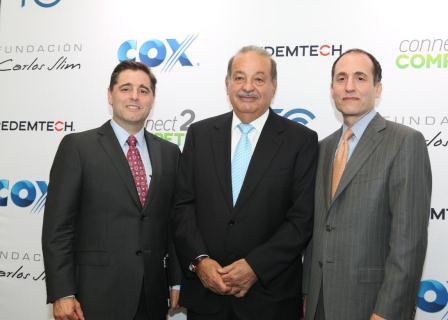 This article was originally published on The Huffington Post.

Mexican business leader and philanthropist Carlos Slim, whom Forbes magazine terms \“the richest man in the world,\” recently donated $3 million to help low-income Hispanic families in the U.S. with school-age children get high-speed broadband and computers in their homes. He also agreed to join the board of the new private-public partnership, Connect2Compete, created to help make this goal a reality for all low-income families in the United States.

The response to this announcement has been curious to me. In more than one article or blog post, people have asked, \“Why would a man who made his fortune in Mexico and Latin America donate in the U.S.?\”

To me, the better question would be, why does it take a non-American philanthropist to recognize and act on one of the most important issues the U.S. faces: the severity of the educational disparities and the importance of technology in solving this problem.

New U.S. census data and a recent column in The Economist examining the connection between digital technologies and economic growth frame this issue really well. On the data side, the census shows that more than half of families with children in the U.S. are expected to be multicultural by 2025. By 2042, the U.S. will be a majority-minority country. Yet on our current course, that majority-minority nation will be less educated and poorer than our country today.

Right now, black and Hispanic students trail their white peers by an average of more than 20 points on standardized math and reading tests – the skills most needed to compete in our global economy. This is a difference of about two grade levels. While 38 percent of Americans between the ages of 25 and 34 have at least an associate degree, that number falls to 26 percent for African-Americans and 18 percent for Hispanics.

Income and wealth figures are just as troubling. United States Census data from 2010 released last month shows median household income of white families ($51,846) dramatically higher than African-American ($32,068) and Hispanic ($37,759) households. If that disparity is not enough, the median wealth of white households is 20 times that of black households and 18 times that of Hispanic households, according to a Pew Research Center analysis of government data from 2009.

While these disparities are great, research has shown that the adoption of technologies like wireless phones and Internet access to generate, process and share information, what The Economist referred to as \“ digitisation,\” can help address this problem in a material way. Citing a 2011 paper that looked at the economic impact of broadband adoption for a group of 25 OECD countries for the years 1996-2007, The Economist notes that, \“The findings are striking: a ten-percentage-point increase in broadband penetration results in an increase in annual per-head growth of 0.9-1.5 percentage points. At an aggregate level, digitisation boosts growth rates.\” Put simply, increasing access to the Internet and making it easier to find and share information can drive economic growth significantly.

Technology is not a panacea, only a means to an end. The Economist article importantly points out that it’s the nexus between access to the technology, knowledge on how to use it (digital literacy) and actual use (action) that matters most. The author notes: \“Digitisation on its own is not enough. Faster information boosts output only when matched with more astute ways of interpreting and acting on new data … match[ing] the new computers and data with better ways of working.\”

Increasing access to broadband and the Internet are an important first step, but we also need to find better ways of applying this technology to accelerate progress and prosperity for all.

Maybe it’s the connection between broadband adoption, education and income growth for Hispanic and African Americans that Mr. Slim has grasped more quickly or simply before his peers or other American leaders. Maybe it’s because he’s seen the difference it can make in Latin America. Maybe he thinks it’s good for the global economy. Maybe that’s why more Americans should be asking, \“What Would Carlos Do?\”

Ben Hecht is also Chairman of the Board of Connect2Compete