What We Are Learning About Catalyzing Impact Investing in Dallas

What We Are Learning About Catalyzing Impact Investing in Dallas

The Dallas Impact Investing Collaborative (DIIC) is on a very intentional journey to learn about how to invest differently in social change. Here are a few reflections on how this group could be a model for mobilizing local funding communities around impact investing.

Last week I had the honor of announcing the Dallas Impact Investing Collaborative’s GrowSouth Sidecar fund. This was a pivotal moment as Living Cities has been part of DIIC’s journey in learning about impact investing locally for the last year and this is the first investment the group chose to make. Through this journey together, we have learned a few things about catalyzing impact investing, exploring how groups like the DIIC could serve as a model for broadening the way local funders use their capital.

The Dallas Impact Investing Collaborative comprises of local businesses and foundations that had talked for years about increasing impact investing in Dallas but had struggled to move from talk to action. Eventually local leaders organized a convening of funders across the metroplex to determine who was interested in learning more. The collaborative was born with clear agreements in place to set aside organizational programmatic priorities in the interest of learning about the process, to pursue at least one investment together per quarter and to reevaluate how the model was working after one year. As a national organization experienced in impact investing, Living Cities agreed to provide staffing and facilitation support to the group during the pilot period.

The GrowSouth Fund is innovative in its own right. It is a pool of investment dollars championed by Dallas Mayor Mike Rawlings and designed to ensure resources land in the southern neighborhoods of Dallas that are chronically undercapitalized. When the opportunity to invest in it presented itself, the group decided to engineer the Sidecar Fund to invest alongside it instead. This allowed members to accept lower financial return but establish higher social impact requirements. The Sidecar will make high social return deals that offer a financial return too modest to qualify for the main GrowSouth fund possible. Providing this intermediate capital option is an important way to ensure that the growth resulting from increased capitalization is inclusive of the existing communities and not another example of well-intentioned work that displaces the people and institutions it was meant to benefit. For example, the first project the Sidecar Fund will co-invest in is a mixed-use development deal through Paul Quinn College that will expand affordable housing and space for key social services like child and health care, but most importantly, will convert to an asset that the school will own and profit from over time. The patient timeline and financials of a deal like this would not be possible but for the Sidecar dollars, and often in the absence of this kind of development, deals that are significantly less beneficial to existing institutions and communities get funded and inflate living costs instead of building local assets. 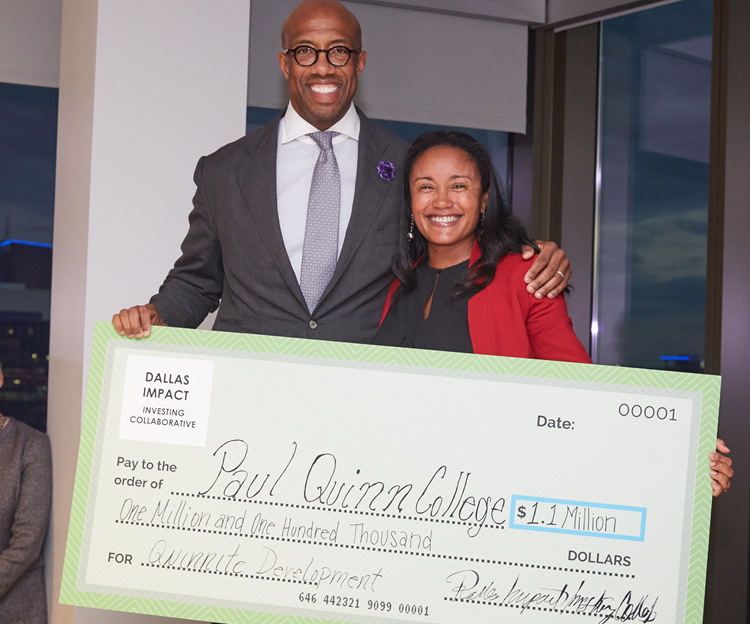 Whereas the legal documents and due-diligence for this particular deal are still being finalized, it represents an example of the kind of innovation and momentum that is made possible when leaders come together in this working model. We believe that we could learn from Dallas’s unique blend of economic growth and resources, high concentration of poverty (particularly among people of color) and committed leaders who have the influence, will and authority to make a difference. It remains to be seen whether this exact model can be effectively replicated across the country, but this pilot has enabled us to capture some key insights about some of the enabling conditions that made this group fruitful.

1. Committed coalition of the willing

Many of the current collaborative members were leaders that have some form of impact investing experience and had been interested in figuring out how to deepen their knowledge to expand impact investing in Dallas for a long time. This is not something that we, as a national funder, pulled together or created. The interest and commitment to learn through doing was already there and we agreed to support the effort and participate. It was essential that there were local leaders bringing people to the table with a vision for increasing innovative funding practices in Dallas.

These committed leaders were essential to the group’s ability to set the stage to learn and invest collectively. Leaders came to the collaborative with different programmatic priorities, but the members agreed to suspend them in favor of process learning. This ensured that members were getting exposure to deals that were beyond their typical circles and broadened the scope of investment opportunities that could be brought to the table. If foundational priorities and goals for the group had not been established upfront when participants were clear about their reasons for joining, it would likely have been difficult to move to action collectively when viable deals presented themselves.

The collaborative put a few guidelines in place and this helped the collaborative adhere to the common learning priorities we established. We set a timeline of one year upfront before we would revisit the model so that our meeting time would be dedicated to pursuing investment and reflecting on what we are learning and not encumbered by premature self-reflective discussion. We also clarified the baseline impact and financial parameters we would look for in deals, addressed how co-investing would work, and made sure everyone understood their role and key functions were staffed. This established a relatively stable and focused container for applied learning and a sense of urgency to act that rarely organically develops in collaborative groups.

There is so much more learning to unpack from this pilot and it will be particularly interesting to pull together the observations from the group after our one-year reflection meeting in December. Nevertheless, this Sidecar investment is the first of multiple deals in the Dallas Impact Investing Collaborative pipeline that have the potential to do the good they are designed to do, but also help Dallas continue to transform itself into a leading city for capital innovation.

Many of the Living Cities staff have decided to participate in the #ADayWithoutAWoman General Strike tomorrow—here’s why.