Values-Driven Entrepreneurs find ways to do well BY doing good. With enough proof-points, they can change the way the world does business.

More and more, leaders at the cutting edge of social change are blurring the lines between “public” and “private” sectors. And many of these leaders are proving that you can do well BY doing good. In 2013 I wrote a series of blogs that articulate my personal theory for values-driven entrepreneurship. I’m resurrecting the posts (which build on each other and should be read in order) in the next few weeks to unpack and preview some of the work you’ll see coming out of Living Cities in our next round. Read the introductory blog to learn more.

Wilson Boulevard in Northern Virginia is not a particularly remarkable place. It’s a long concrete stretch lined intermittently with nondescript office buildings, Starbucks and quick food stops. But it’s where I had my first baby. No, I’m not referring to my handsome son, Dylan, I’m referring to my other baby.

As Executive Director of Year Up National Capital Region, I had spent close to a decade raising and nurturing something from inception in a way I had never done before. When I came to DC there was no site, there were no corporate partners and we were literally recruiting our students from behind fryolators.

I had this in mind on one particular day, more than seven years after our doors opened, as I drove up Wilson Boulevard. In my time there, we had served over 1,000 young people, raised $20 Million, hosted President Obama, and continued to see over 85% of our alumni in technical careers and higher education. I was one proud momma. Who wouldn’t be?

So why, as I neared our building, did such a strange feeling come over me? It was something I had never felt before. I stopped my car and looked up at the windows to the second floor. We had new hills to climb, more young people to serve and more important work to do. And then the unshakable reality hit me. I was not the one to take us there. I kept driving.

This realization was, at once, exhilarating and daunting. I had been blessed to find a platform that allowed me to leverage my passions and proficiencies and, after this many years, the site was a part of me. Although I knew it was time for me to move on, I couldn’t possibly imagine where to go or what to do. Prior jobs had pushed me to learn and grow, but with Year Up I had crossed a threshold from which there was no return. I had found work that not only was stimulating and challenging, but also had meaning and reflected my personal values.

So instead of thinking about where I wanted to work next, I started reflecting on what I wanted out of my next environment.

I genuinely wanted to help people be the best versions of themselves they could be.

I began synthesizing what I had learned over the last seven years. The work to which I was most often drawn and the systems I most often built revolved around shepherding, stewarding and investing in people. And I began to see that, whether it was staff, students or stakeholders, people gravitated to me when they sought guidance down the Path to Personal and Professional Fulfillment. By no means did I feel I was the one to light their way, but I listened. And I genuinely wanted to help people be the best versions of themselves they could be. Of the many with whom I spoke, a spectrum seemed to emerge.

At one end were the people whose work provided both financial security and upward mobility. Although they felt accomplished, many also saw their work as having come through personal trade-offs. Sometimes they felt empty, often they felt regretful and almost always they were seeking more meaning.

On the other end, people whose work was founded in social justice or community activism felt they had meaning up the wazoo. And contrary to an often-unsaid assumption, these were folks who felt accomplished and proud of their achievements; they weren’t envious of those on the other end of the spectrum. What they did lament was that their commitment to service and mission didn’t always pay the bills. In fact, it often imposed limitations on the opportunities, education and quality of life they could provide for their loved ones.

So these were my two choices? Wealth or meaning, take your pick!

So I set out on a journey to build just that. Hanging from my utility belt were three tools: Christopher Gergen and Gregg Vanourek’s Life Entrepreneurs, Daniel Pink’s Drive, and Tribal Leadership by Dave Logan, John King, and Halee Fischer-Wright.

As I read these works, a model began to form in my head, one with which I could set in motion a cycle of perpetual motivation, purpose and success. 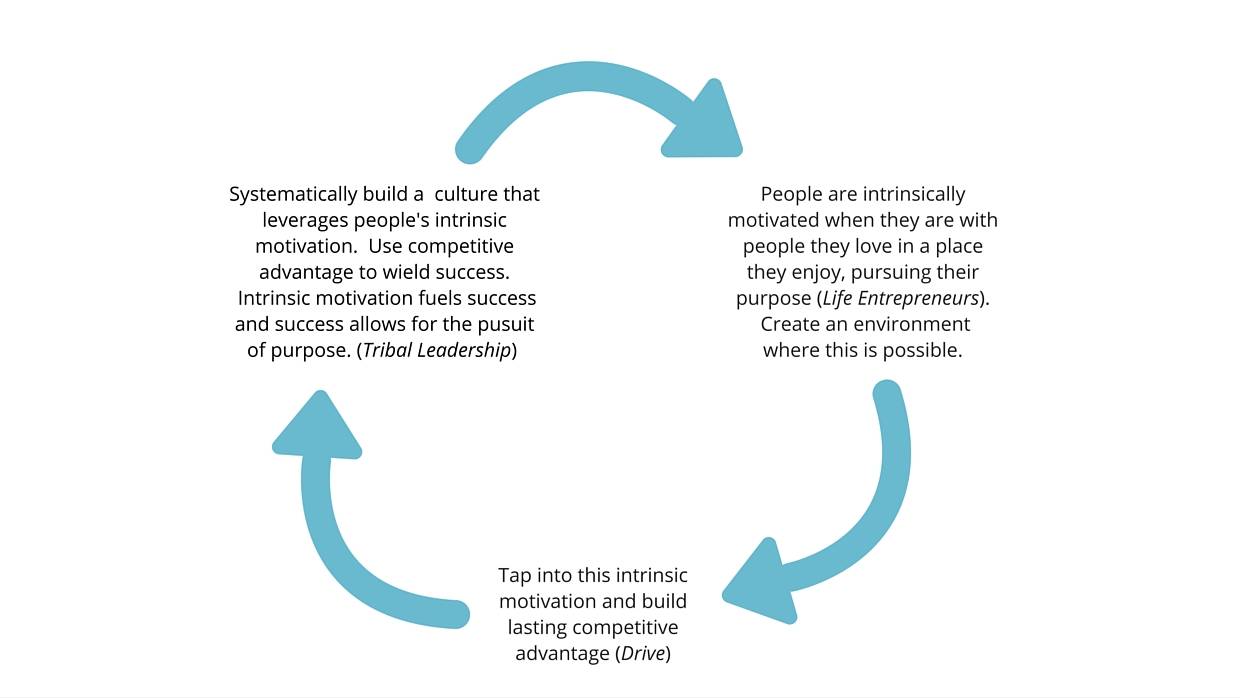 Values cycle as created and defined by Tynesia Boyea-Robinson.

Okay, so I had the model of how I wanted the company to look and feel. But what would we do? It was the question everyone I met wanted answered. Early on, I fumbled a bit when asked. Not because I didn’t know the answer (human capital solutions), but because I believed, as I still do, that it doesn’t really matter. As long as we outperform the market in whatever industry we choose, we can prove this model works.

I also knew that I was less concerned with what we were making than with the environment in which we made it. If I could create an organization wherein people could always live, learn, and grow, success would follow. Why exactly would that work? Because we would be intentionally grooming and developing people in pursuit of their purpose. And when people’s passions and purpose are nurtured, they do their best work. Think about the difference in output when you’re doing something you’re passionate about versus something you feel obligated to do.

This might sound a bit pie-in-the-sky but, more and more, values-driven entrepreneurs are focusing on corporate culture not as a means to an end, but as the actual end itself. Take Tony Hsieh, Zappos' CEO. His first and only priority was to focus on culture and customer service. The thinking was if the employees were happy and the customers were happy, the rest would fall into place. The result? Enthusiastic, devoted employees, loyal customers and $1 billion in gross merchandise sales.

Not only can companies do well AND do good, they do well BY doing good.

As our world becomes more complex, as people are increasingly reduced to 140 characters, there is a greater need for people’s places of work to occupy a greater space in their lives. Companies are not only impacting communities, they are the communities within which people exist. Whether it’s Zappos or Timberland or Clif Bar, there is a trend among companies that consistently outperform the market. The leaders of these companies don’t just adhere to a set of values they brainstormed in a boardroom. Their values serve as an inner compass; the values guide them and lead them down the path to purpose. And for the values-driven entrepreneur it isn’t about walking this path alone. It’s about leaving the path open for as many other people as possible so that they might 1) find their own path to purpose but also 2) work together to achieve something greater for the collective.

Is this way of doing business sustainable? Will it appeal to broader markets? Can it be scaled? Yes, yes and yes. Proof of this comes when companies who take a values-driven approach consistently outperform the market no matter the industry, service or product.

Values-driven entrepreneurs are still in the minority of the national, never mind global, market. But my hope is that here, in the pages of this blog, I can create a space for leaders of this mindset to come together, share how what we’re doing is working and start to build a platform for a values-driven shift in business. And I believe, with enough proof points, we can actually change the way the world does business.