What I Learned from a Gathering of i-teams in Memphis

What I Learned from a Gathering of i-teams in Memphis

In March of 2016, seventeen i-teams from around the United States and Israel came together in Memphis for two days to collectively grapple with the most pressing challenges facing cities around the world, and to learn from each other and other leaders about promising solutions to those challenges.

From being the home of the Blues and the birthplace of Rock ‘n’ Roll to its role at the forefront of civil rights and social justice movements, Memphis is a city like no other. In March of 2016, seventeen i-teams from around the United States and Israel came together in Memphis for two days to collectively grapple with the most pressing challenges facing cities around the world, and to learn from each other and other leaders about promising solutions to those challenges. The choice of Memphis as the place to do this was not accidental. We wanted to be able to see firsthand the impact that Memphis’ own i-team has had since launching its work in 2012. And, we wanted to spark inspiration by giving the teams a chance to explore the city’s rich history and culture. Here are some of my takeaways from the event about what the i-teams are learning and doing:

Much of the conversation in Memphis focused on the topic of impact. One of the special things about i-teams is that they are all applying Bloomberg Philanthropies’ tested, data-driven Innovation Delivery approach to help City agency leaders and staff to achieve measurable results.

For example, during a dialogue led by Memphis’ i-team, I was excited to hear about how they have made remarkable progress in areas such as reducing gun violence, restoring economic vitality to core city neighborhoods, and building excellence in customer service. Indeed, in terms of economic vitality the team’s work reduced vacancy rates in a central corridor by 82%, supported the launch of 15 new small businesses, and prototyped 8 pedestrian and bicycle infrastructure projects. All of these efforts have combined to attract positive national media coverage and change the face of neighborhoods. As we enjoyed a tour of small businesses supported by the Memphis i-team, a team member from another city remarked: “I came to Memphis years ago, before this work, and it gives me hope to see what they have been able to accomplish. This is a very different Memphis. It looks and feels different.” This new look and feel is attracting other kinds of investment, including over $500,000 in citizen philanthropy through crowdfunding platform ioby.org. 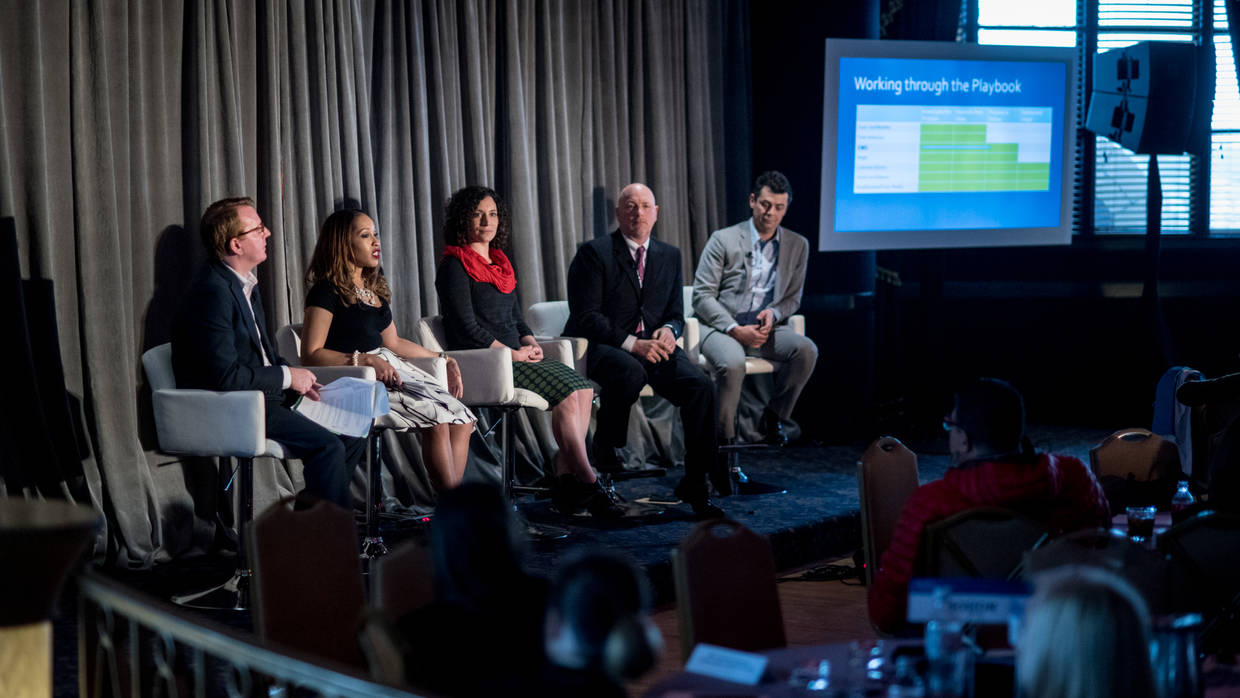 Many of the sessions at the convening were designed to reinforce the focus on results that was embodied during our time with the host team. For example, during a conversation about metrics and targets, teams shared how they have been identifying, capturing, and analyzing data. Building these capacities, are top-of-mind for all teams and we look forward to sharing more on this topic in a future post.

Several of the teams emphasized that some of their biggest wins have been on progress in breaking down siloes between City departments. For the first time, one team shared, departments are independently talking and working together on a regular basis. It is clear that the work that these teams are doing will extend beyond their current priority areas. What they are doing is changing the culture of city government from the inside out.

All of the i-teams understand that storytelling can be a powerful tool for engaging stakeholders and the broader public. During a conversation about storytelling, Andrew Maxwell, Director of the Syracuse i-team, spotlighted the great work that team has done in terms of articulating and communicating a clear vision for the future of their city: “This vision and the plan for achieving it should be grounded in data, but should also paint a picture of what the work will mean for residents’ lives.” The conversation also focused on the need to think about communications as being about dialogue. Listening to stakeholders is as important as speaking with them.

During our time in Memphis, the i-teams’ openness in terms of sharing what has worked and hasn’t really struck me. These teams are taking on really difficult problems for which there are no quick-fixes. Time and time again, we heard teams talking about how they have to be open to challenging assumptions, to course-correcting. For example, teams shared challenges around accessing the data that they need at the right time, around navigating mayoral transitions, and around getting their work off the ground while still trying to understand the political context of the problems they are working to address.

While these and other obstacles are indeed real and significant, it was evident that the teams were energized by getting to discuss these roadblocks with each other. In fact, in a survey that we conducted after our time in Memphis to understand how best to support i-teams in their work moving forward, many of the teams cited this type of candid and transparent conversation as being extremely valuable. Said one team member: “The most meaningful takeaway was the importance of meeting with other i-teams. I met others who are navigating some challenges that are similar to the ones faced by my team, and this exchange gave me new ideas and tools for achieving our goals.”

Personally, I left Memphis inspired and excited to continue learning from the incredible people I met there, from the i-team members to the small-business owners we talked to. It gave me great hope for what can be achieved when people are committed to creating the change they want to see.