This past December, over forty municipal employees from Tel Aviv-Yafo, Israel gathered to develop ideas to improve quality of life for residents in the neighborhood of Neve Sha’anan.

The small neighborhood in Tel Aviv, whose name translates to “Peaceful Abode,” functions as a major transportation hub and has become a haven for migrant communities fleeing conflict-torn countries in the region. Today, refugees make up nearly 90% of the resident population of the neighborhood. In addition to the difficulties inherent in being a migrant, asylum seekers also encounter snags resulting from their immigrant status.

“People live in overcrowded conditions. They have no access to the health and welfare systems and their status is unsettled. Most of them arrived from warzones and experienced traumas. It’s hard for them to get along with and understand the Israeli culture,” according to one Sudanese activist.

Recognizing the issues facing the neighborhood, Mayor Ron Huldai directed the city’s i-team to address the issues of both Neve Sha’anan and the migrant community.

The team got to work, organizing a series of workshops that culminated in the session with municipal workers. First, the i-team met with both Israeli citizens and migrants from the neighborhood to get an understanding of the daily pressures, activities and values in play for each group. They met with each group twice, once to generate ideas, and once to work through two of the ideas to get an understanding of what implementing changes would really mean for residents. 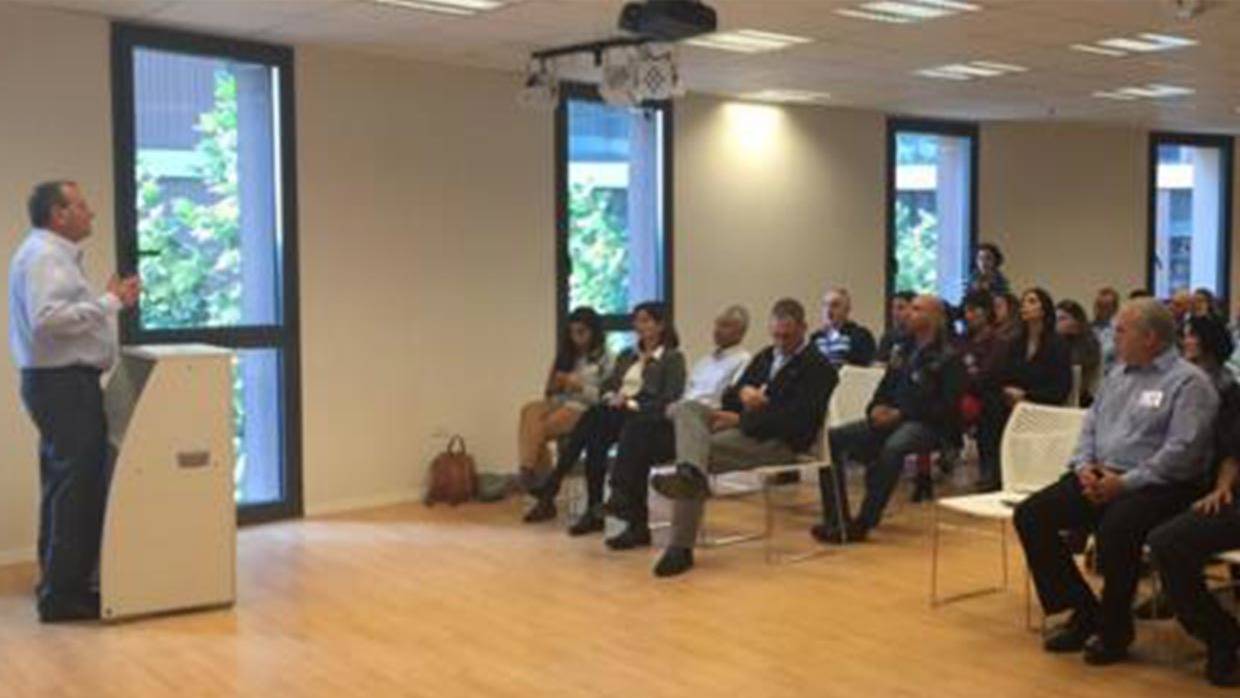 All the while, the city began greater engagement on the ground with the community. The i-team recently led a contingent of mayoral deputies on a tour to meet with organizations active in the area and with the migrant population. Mayor Huldai joined one of these meetings and was so energized, he signed up to open the December municipal worker session.

That session included a cross-section of workers from the departments that deal with the neighborhood, from street cleaners to department managers. The exercises were focused around “personas” – fictional representations that map out key characteristics of people they met on the ground in Neve Sha’anan – and the “scenarios” they may face in a given situation.

Each group of city workers focused on generating ideas with the challenges of a specific persona in mind. One group, for example, focused their ideas around “Goldilocks,” a 77-year-old Israeli widow and long-time Neve Sha’anan resident who is concerned by the declining quality of life that she sees in her neighborhood. Another focused on “Teklewini,” a 29-year old migrant restaurant worker who left Eritrea eight years ago who has a wife and two kids, but speaks little Hebrew and because of his busy schedule has little time or energy to learn it.

The i-team was pleasantly surprised by how readily their workshop participants connected to the personas, and ideas generated in these sessions will ultimately inform the initiatives that the city rolls out in the coming weeks. 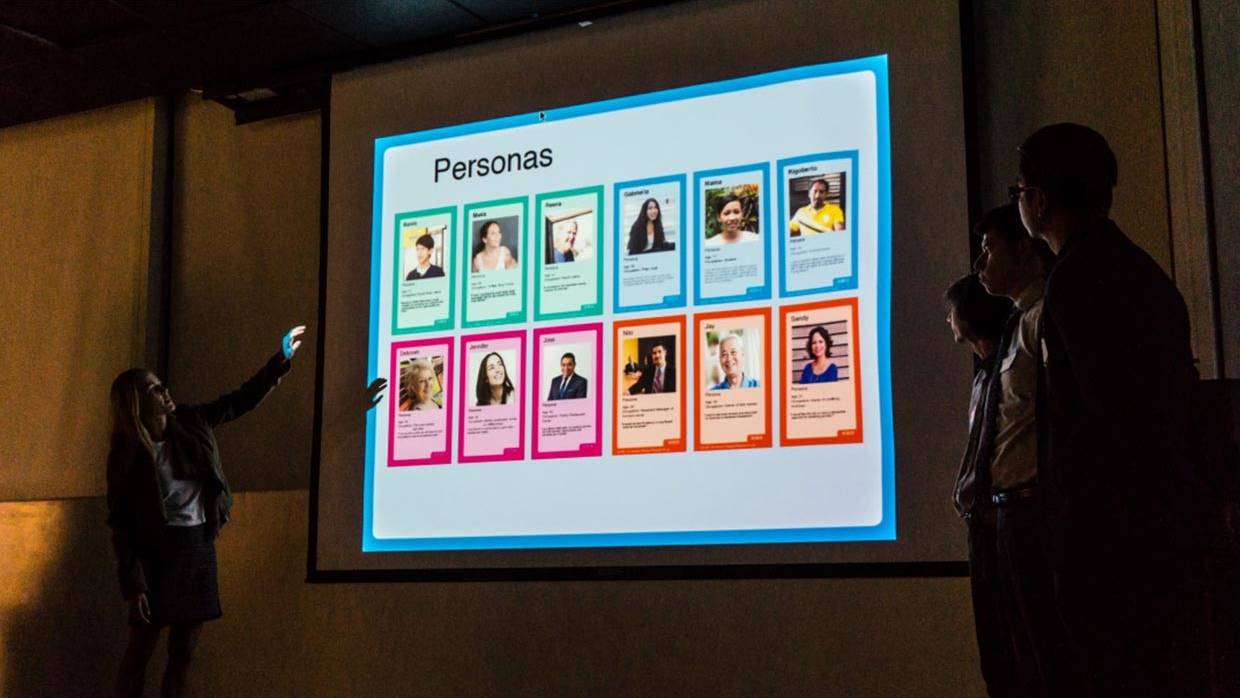 More and more, cities are adopting an approach known as human-centered design; that is, the mindset of putting the user first and planning programs and processes around them. In order to do that, cities must design opportunities to interact in real time with the people who use their services. These conversations allow cities to develop a representative population whose experiences can help shape the way programs are designed.

In Boston, the i-team recently collaborated with a human-centered research and strategy firm, Twig and Fish, to conduct in-home interviews with residents as the team works to address a shortage of middle-income housing. Partnering with an outside firm gave them the added capacity they needed to quickly conduct research and inform their initiative development strategy

The 2½ hour visits allowed the team to ask questions and facilitate exercises with residents. They are now conducting an analysis that will allow them to gain insights into the housing trade-offs and choices residents make. The i-team will be developing personas and design guidelines from the analysis to inform their initiatives to decrease the cost to buy, build, and own housing. The study helped ground the work they had already done on the quantitative side of their investigation.

“For us, personas are not the be-all and end-all of our work.”

“For us, personas are not the be-all and end-all of our work,” said Susan Nguyen, Project Manager for the Boston i-team. “Personas are one of the many tools that can benefit your end product. It complements the quantitative data and helps us stay focused and keep the constituents and residents we are serving on the forefront.”

The use of personas and scenarios is a significant advancement of how cities are addressing their most intractable problems. Even for those cities using data to make decisions, there are gaps in quantitative information that prevent policy makers from having a base of knowledge about the communities they are hoping to serve.

“Every individual in a sample size is different; there’s variation and texture,” said Seattle i-team Director Tina Walha. “By using personas, we’re able to take this variation into consideration with the youth we’re trying to serve and design solutions for as many of them as possible while trying to stay true to their unique needs.”

Seattle’s i-team, which is focused on decreasing violence and improving economic opportunities for young Black men, conducted extensive outreach in the community in an effort to fill those gaps. When they used the personas stemming from that outreach in idea generation exercises, it allowed participants with limited knowledge of that community to put forth ideas on how to connect young Black men with services. While the process can be painstaking the results can lead to insights that produce breakthrough innovation.

In addition to firms like Twig and Fish, teams are creating relationships with area universities to reach out directly to the end-user. Students at Cal State Long Beach’s User Experience Design course recently presented the findings of a semester’s worth of study that resulted in a series of twelve personas and experience maps that the i-team there will use to improve the experience of starting and growing a business in Long Beach.

“Typically in government, we sit in a conference room or with a consultant and come up with a list of questions for a survey which often generates the types of answers and conclusions we would expect,” said Long Beach i-team Director John Keisler. “Beginning without assumptions, talking to human beings, and using personas and experience maps leads you to new questions you weren’t even aware you should have been asking. It really helps to personalize the experiences and challenges faced by the people we serve.”

The research will serve as a jumping off point for the team as they begin developing solutions for their business growth challenge. Next month, the i-team will engage with Code for America to create a web application that connects entrepreneurs to business planning resources, just one of the student recommendations. The team will also continue to work with the students next semester as they design prototypes of recommended solutions.

Similarly, the Mobile, Alabama i-team recently unveiled prototypes developed by students from Auburn University’s School of Industrial & Graphic Design that explored the idea that jobs and job training opportunities should be more easily accessible to people in the community.

The students’ projects include a range of mechanical, audio, screen-based, and app-based solutions to deliver career and training information to interested users of mass transit in Mobile. Under the direction of the i-team, the projects incorporated data gathered through on-the-ground interviews of transit riders, transit officials, job seekers and local businesses. These interviews ultimately shaped the approach students took.

Mobile is currently in the process of applying for a utility patent for one of the prototypes that they believe could be helpful to other cities around the country—a scenario that would not have likely played out had they not taken the time to understand their end-users.

While putting the person first is important for groups aiming to take on heretofore intractable urban issues, government expertise is not being ignored. Back in Boston for instance, the team is working closely with both the Department of Neighborhood Development and the Mayor’s Office of Neighborhood Services, sharing results of their housing study and giving others a chance to looking at qualitative clustering and persona development so they can give their input. This process also allows the i-team to see if their findings align with what experts in the field are hearing and what they have seen through their work.

This is also an important piece of making sure that agencies are bought into the process. Human-centered design can be a great way to make sure that solutions are closely aligned with the problems people are experiencing, but all the personas in the world won’t help you if the agency ultimately responsible for delivering services doesn’t understand the value it has to the process.

We will continue to examine the process i-teams are using as they develop prototypes and initiatives from their idea generation work.