Led By Data: Insights from the Syracuse i-team

Led By Data: Insights from the Syracuse i-team 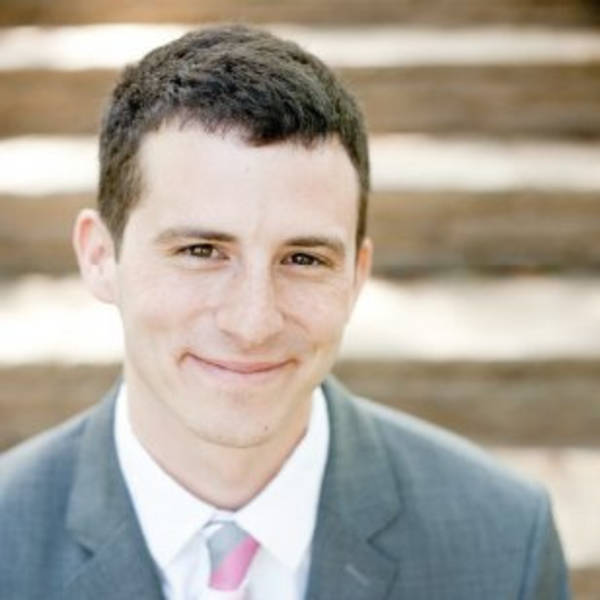 The City of Syracuse’s Department of Innovation (i-team) was created in April, 2015 thanks to a grant from Bloomberg Philanthropies. The Syracuse i-team’s first priority area is the city’s infrastructure systems, which are regularly battered by the harsh weather of Central New York. Sam Edelstein, the team’s Analytics Coordinator, reflected on the team’s reliance on data to inform and drive their work. This post, the first of two on this topic, originally appeared on the Syracuse i-team’s blog, Innovate Syracuse.

Each step of our work is meant to be led by the data that the City has collected. We use this data to diagnose problems and find solutions. For this blog post, I’ll bring you through some of the steps we take to do our data analysis.

Since almost all of us on the Innovation Team are new to city government, one of the first steps to doing data analysis is finding the data that exists. Like so many other governments, the City of Syracuse has much of its data on paper or in legacy systems that make it hard to use.

Luckily for us, though, an employee of the Department of Public Works named Steve Prievo, who is responsible for rating all the roads in the city, taught himself some best practices for data management, and has maintained spreadsheets and databases of all the city’s roads for almost 30 years.

Our work focuses on improving the city’s infrastructure. This, of course, includes roads. Having Steve’s historical data of road ratings told us a lot about the current status of our roads relative to how they were in years past. 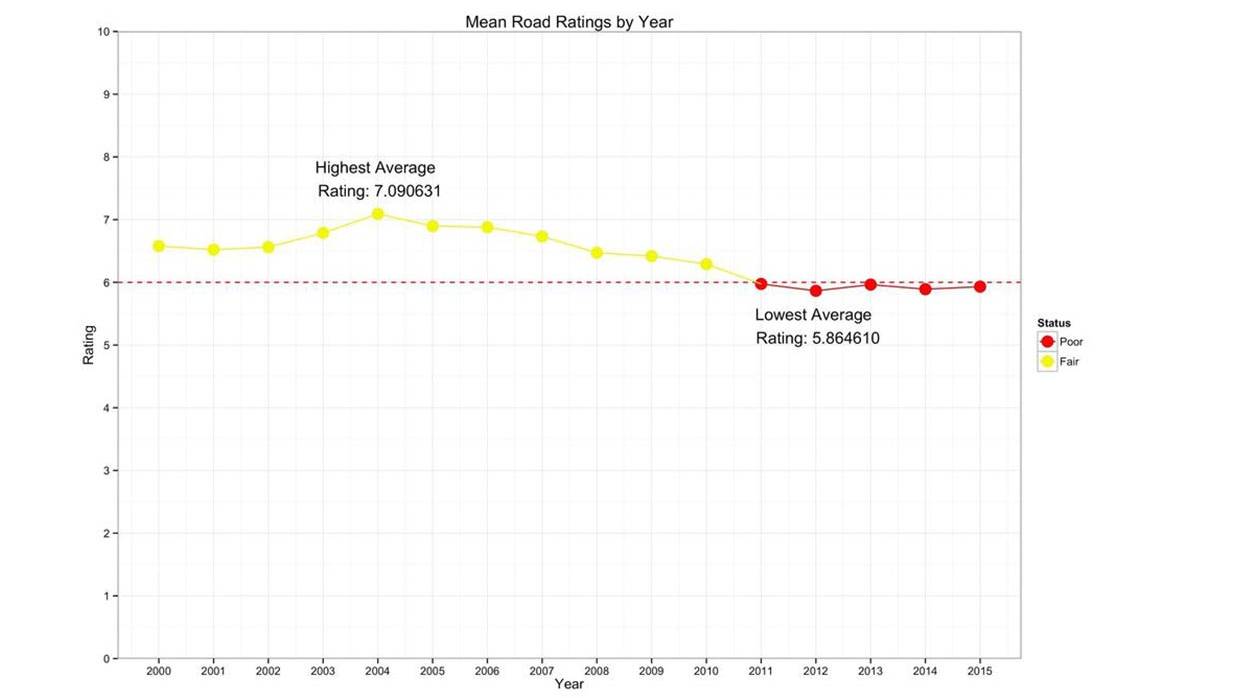 The chart above shows the average road rating each year since the year 2000. Though the rating has only dropped by just over one point, as we’ve learned, this drop means fixing the roads will now costs millions more dollars than it did before. Before going any deeper into the analysis, it is worth backing up a step to explain how road ratings work in Syracuse. Steve Prievo has been responsible for assigning ratings to the roads based on several different factors, including cracking, patches, potholes, and more. Each block of road in the city is rated once every two years, and is assigned a score:

Roads with scores 5 and below are candidates for reconstruction, which means that a crew mills (or shaves off) about three inches of asphalt from the road and then repaves the road with new asphalt.

This process is very expensive. It costs about $30 per square yard to reconstruct a road, and the average block is about 1875 square yards.

This means just to mill and pave a block of road can cost more than $56,000 dollars, not including fixing the curbs and curb ramps, which can almost double the cost. Once we saw that the average road rating was dropping, we wanted to look more specifically at the data to see how many roads had a “good”, “fair”, or “poor” rating. 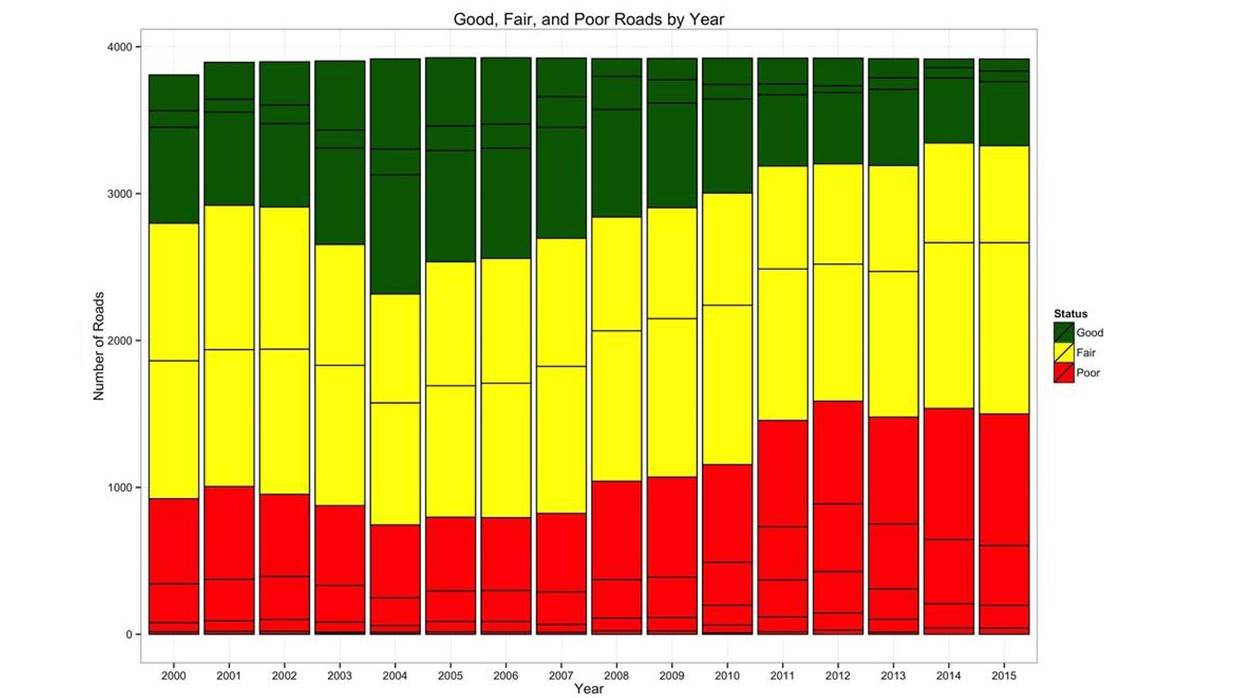 The above two charts show that not only are there fewer good roads in the city, but the number of fair and poor roads are increasing rapidly. More specifically, the good roads are now rated as fair, and the largest number of roads are rated as a “6”. Since anything lower than a “6” means a road should be reconstructed (and thus will be very expensive), we knew that finding a way to keep the good and fair roads from falling into “poor” territory was very important, and right now the roads are dangerously teetering over.

We’ve always assumed that keeping the good infrastructure good was an important part of our work. Preventative maintenance is often overlooked, but it is also vastly less expensive than fixing a failing part of our infrastructure. Just look back at the water main break we witnessed in July. That break shut down restaurants, it caused traffic, it destroyed a road, and it cost the city money. The same goes for road maintenance.

Slurry seal: a mixture of water, asphalt emulsion, and crushed rocks to an existing pavement surface.

Improved road: A road with gutters and curbs with a surface of concrete or asphalt.

Unimproved road: A road without curbs or gutters with an asphalt surface.

Every four years, unimproved roads are slurry sealed across the city. This slurry seal acts almost like a nail polish to the road, filling cracks and small potholes and protecting the road. Historically, improved roads do not receive the same treatment because the slurry seal adds about a quarter of an inch of asphalt to the road, which could eventually overtake the curbs and hurt the gutters.‘

“Our thought is that we shore up our good roads now, while ensuring none of the poor roads become too dangerous for driving, biking, or walking all while continuing to fill potholes.”

The cost for slurry sealing, though, is only about $1.50 per square yard. So that same average block of road would cost less than $3,000 to slurry seal. Granted this is not a permanent fix, and likely would not last as long, but we thought that this could be a start.

At this point in our analysis, we have diagnosed the problem - too many streets are declining in rating which costs the city more money to fix. We think we have one potential solution to slurry seal more roads, but could there be any more?

We looked at calls to CityLine, which is where residents and visitors to Syracuse can call to make service requests, including to ask for potholes to be filled. We’ve learned that potholes are not necessarily the problem on a road, instead they are a symptom of a bigger problem - water that has seeped under the asphalt.

Our cold winters that often have freezes and thaws are perfect breeding grounds for potholes. Filling them does not fix the problem, but it does help, and it makes it easier to drive. Fixing potholes might buy us a little more time on each road, so we wanted to look at how long it takes, on average, to fill each one that is called in to CityLine.

“It costs $30 per square yard to reconstruct a road, and the average block is about 1,875 square yards.”

It currently takes 18 days, on average, to fill a pothole that is reported to CityLine, though this does not do the Department of Public Works justice. They fill more than just the potholes that are reported through CityLine, though the total number of potholes filled are not tracked. One of our initiatives will ask them to track how many potholes are being filled, total, so we all can have a better sense of just how big the workload is, and how quickly they can be filled, so we have better expectations.

Additionally, the street repair crews have two relatively new pothole filling machines, called Durapatchers. These trucks are able to fill potholes at basically any point in the year, have better results, and need fewer crew members to run them. Based on our analysis, the crews that go out on Durapatcher trucks fill potholes, three or four times faster than crews that do not use Durapatcher trucks. Another recommendation of ours will be to have crews that can keep these trucks out on the street full time.

The next issue is limiting the number of cuts in the road. We will talk more about some of our proposals to limit these cuts later, but generally with a more coordinated plan for construction, we should have fewer cuts. This means fewer times the road is compromised, and hopefully a longer life.

Finally, the city does not currently seal cracks in the road - those squiggly lines you have probably seen on highways. Sealing cracks can keep water out and prevent issues like potholes from coming up.

We are still working on the final recommendation for how to impact roads in the city, but we have some ideas, that are all based on the data we’ve collected, found, analyzed, and learned about through interviews.

Currently, we are working on some models to help easily prescribe the type of attention each road needs at each time. For now, this is what we are working with:

We’ll continue to update you on our work with this model, and will also walk through similar data analyses for other infrastructure in the city.

Sam Edelstein serves as the Analytics Coordinator for the City of Syracuse Office of Innovation.

Learn how the Syracuse i-team is driving a shift toward data-oriented government in their city.